In Search of Civilization: Remaking a Tarnished Idea 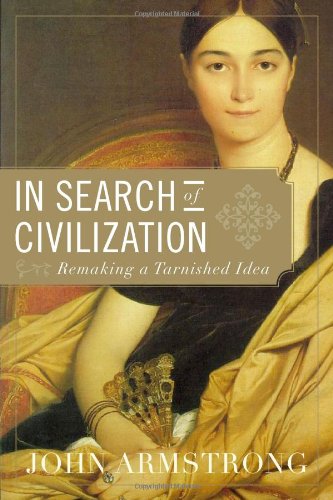 Quick now: What exactly is civilization?

If you find yourself hard pressed to define it, though certain that somehow you know full well what it is, boy oh boy, is this the book for you!

For that matter, this book should be required reading for all citizens, seriously. For without boring the reader with academic jargon, without preaching in the least, and without talking down to the reader even once, the author, an Australian academic, not only tells us what civilization is, but why it’s important—not as a sociological concept, but in our day-to-day lives—in your life.

Moreover, it’s probably impossible to read in this book what civilization is without reading between the lines what it isn’t, and if you thought for a minute that these United States represented the acme of Western civilization on the threshold of the 21st Century, then you haven’t been paying attention (but the current contagion of boorish public behavior might serve as a clue).

The “core problem” is two-fold, says Mr. Armstrong, philosopher in residence at the Melbourne Business School, Melbourne University: too much materialism, too little spiritualism. And, no, he’s not telling us to get religion. He means a spiritualism that comes from a high-minded pursuit to develop one’s best self—in sharp contrast to accepting all the opportunities for self-indulgence that materialism offers us.

Nor is he simply critical of materialism. To the contrary, he says that it offers us greater opportunities to build the good life. What’s missing in today’s equation, he says, is the spiritual capacity to make the most of our material wealth.

As an antidote to that condition, Armstrong recommends, among other things, a resuscitation of (brace yourself) refinement – not the fancy-nancy kind of behavior employed mainly to put on airs, but the earnest kind that feeds the deep springs of our humanity. Toward this end, Armstrong encourages us to cultivate not only an appreciation of the arts, but an appreciation as well of how the arts can enrich us.

“The work of civilization is to speak to the ordinary self of its longing to become the best version of itself,” Armstrong writes. “What is finest in the history of a civilization is not arbitrary,” though it is too often treated as no longer relevant, even by the cultural gatekeepers at museums and various ivory towers.

Actually, he notes, some of the finest treasures of civilization can come unawares from life’s smaller, more private encounters: “. . . a table set for lunch in a quiet, leafy garden, . . . the golden glow of lamplight in a bookish room, glimpsed through a window while walking home at night. . . .”

These random and subjective “images of civilization,” though connected to prosperity, are deeply meaningful, Mr. Armstrong says. “I take from this the thought that we want to—need to—join up intellectual endeavors with the private and intimate questions of life. The question ‘What is it to me?’ can be asked in a dismissive tone of voice. But when posed seriously in the hope of a genuine, revealing and usable answer, it lies at the heart of all serious thought.”

So, ultimately, civilizing oneself comes through cultivating one’s sensibilities in positive, constructive ways both large and small—the exact opposite of what we see so often in public behavior and public discourse today, which suggests incipient decadence and smacks of barbarism. But even here Armstrong urges us to take the high road.

Decadence, he says, is “disguised despair, which cannot be fixed by stern words,” and barbarism is immune to the contempt that the civilized naturally feel for it, “because crudity cannot cure itself.”

Mr. Armstrong’s prescription reflects clearly that the author practices what he advises: “It is with inside knowledge that one addresses the barbarian or the decadent,” he writes, and that “inside knowledge” is empathy—an understanding of “the barbaric and decadent aspects of oneself.”

If by now, you’ve begun to feel that surely Mr. Armstrong is talking about “them,” not “us,” note that the author cautions early on that “you might well see yourself as belonging to a civilization, but that does not on its own make you civilized.”

And as if to dispel any lingering doubt that civilization is up to “us,” not “them,” the author quotes Mahatma Gandhi. Asked what he thought of Western civilization, Gandhi replied, “It would be a very good thing.”