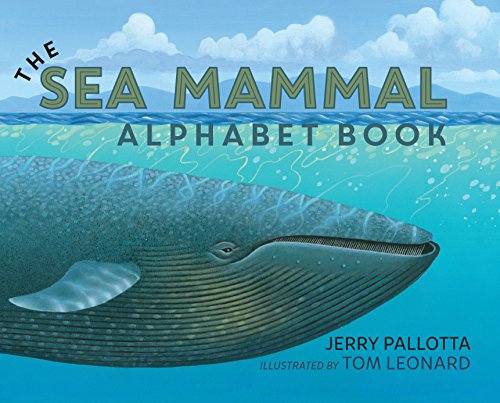 The Sea Mammal Alphabet Book is an invitation to all children to explore the animal wonders of our oceans. In keeping with his other ABCs books, Jerry Pallotta guides the child reader through the alphabet and introduces more familiar sea mammals like the Blue Whale as well as lesser-known animals like the Dugong (a sea cow and cousin to Manatees) and Tucuxi (a South American dolphin).

Each letter features different sea mammals and offers interesting information about them: dolphins communicate with “clicks, squeaks, and whistles,” and some whales have teeth while others use baleen to filter their food. And then there’s the occasional fun fact that children will enjoy: Did you know the Inuit word for a narwhal is “qilalugaq tugaalik?”

Beautifully illustrated by Tom Leonard, highlighting what these sea mammals look like, eat, and how they behave, each page turn offers an up-close seat at ocean life. Younger readers will appreciate these lively scenes of animals in their natural habitat while the older child reader will come away with new knowledge to share with others: Do you know what a “weaner” is? Or “sea canaries?” How about “spyhopping?” And that Crabeater Seals do not actually eat crabs?

While this book is somewhat “whale” heavy in content, followed by dolphins and seals, these are sea mammals children love. A child reader who already has good information about these animals, however, might have appreciated learning about a wider variety of creatures. Pallotta does a fine job gently commenting on important human-meets-sea mammal topics including how Juan Fernandez Fur Seals had been hunted by people for their fur, that Pilot Whales sometimes ground themselves called “mass strandings,” for unknown reasons, and that extinction of a species (like the Yangtze River Dolphin) is possible if humans do not pay closer attention to the sad effects of damming, pollution, boat propellers, and overfishing.

A true appetizer of a book, The Sea Mammal Alphabet Book will inspire children to learn more about sea life, particularly as there is growing awareness and concern for ocean conservancy and preservation. On that note, the book ends with an important message about staying clear of wild animals. Despite an illustration of a snorkeler reaching out to a dolphin, the critical idea here is about respecting these sea mammals by giving them a wide berth and not approaching them where they live—so they may live full, undisturbed lives.