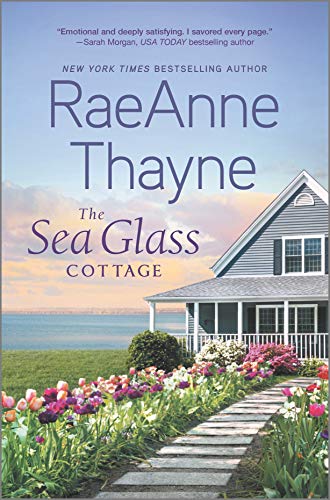 Olivia Harper lives and works in Seattle, putting in grueling hours at her job as well as on her startup website business, Harper Media. One day when she is in a local coffee shop, the waitress gets accosted. Frightened, Olivia hides under the booth, unable to help. This incident leaves her with an unbearable case of anxiety, and since the occurrence, she fears leaving her apartment. Not only fearful, she is ashamed for not having the courage to intervene. Between the stress of this event, her demanding job, and her recent breakup with her fiancé, who works at the same company, she wants to crawl into bed and stay there.

Then she gets a call from Melody, her best friend from back home in Cape Sanctuary, CA. Olivia's mother Juliet has had a serious fall and is in the hospital, with a concussion, broken ribs, and a shattered hip.

Though Olivia and Juliet have been somewhat estranged since Olivia's beloved father perished in a fire, she cannot ignore her mother or Harper Hill Home and Garden, the business her father built, which Juliet took over after his death. She is also worried about her 15-year-old niece, Caitlin, who is being raised by Juliet after Olivia’s older sister Natalie succumbed to an overdose.

Olivia, distressed that her vibrant, mid-50s mom is laid up, knows how independent and busy she is with the nursery and Caitlin. This is the bone of contention between them. After Olivia's father passed away, and shortly after Natalie announced her pregnancy as an unmarried mother planning to keep her child, Juliet put all her time and energy into her business and her oldest daughter, leaving teenaged Olivia feeling abandoned. Then Natalie died when Caitlin was an infant, meaning more responsibilities for Juliet and less time for Olivia.

Armed with her tiny pooch Otis, Olivia makes the 12-hour drive home, dreading her reception and the hostility she is suddenly facing from Caitlin. However, she knows it's imperative she goes, and though things are strained, she loves her mother  and wants to help.

Arriving at the hospital, Olivia realizes how much Juliet is respected:

"Everyone loved her mom. It was hard to avoid that realization, now that she was back in town. Juliet was something of a heroine around town, a widow who had lost her husband to a tragic accident and a daughter to addiction but still managed to face her trials with a smile and a generous spirit.

"Her mom was amazing. Olivia agreed. She wished she could be half the woman Juliet was. Her mother would never have let one traumatic incident in a coffee shop completely paralyze her. If her mother had been there and had seen that unprovoked attack, she wouldn't have cowered under a table. She would have been like the other customer who ultimately had come to the rescue. Resolute. Fearless. Powerful.

"The complete opposite of her daughter."

As Olivia settles in for a temporary stay, she reconnects with Melody and bumps into her brother Cooper, who is now the fire chief. Cooper and Natalie grew up together as best friends, and though Olivia was barely in her teens, she always had a crush on the handsome older boy. She now realizes that flame still kindles. Cooper had dealt with an unhappy childhood caring for his alcoholic mother and younger sister, and Olivia is surprised he returned to Cape Sanctuary, where he vowed to leave when old enough and never look back.

Olivia is overwhelmed, not knowing how to deal with her feelings for Cooper, her niece's ambivalence, helping at the nursery, caring for Juliet, and keeping up with Harper Media. She longs for a real mother-daughter relationship, yet she senses a distance between her and Juliet, and that her mother is not being forthright with her about everything.

Meanwhile, Juliet, disillusioned by her condition, wallows in a bit of self-pity. She has never had to depend on anyone, and now she's in a place where she relies on assistance. And, who better to help than her dear friend Henry Cragun, who lost his wife—and Juliet's best friend—to cancer several years ago. Juliet does not want Henry to see her as an indisposed old lady, though he's there whenever necessary and then some. Juliet has fallen in love with Henry, but a relationship can never work between them for she holds a secret she has not disclosed even to her own daughter. So much to her dismay and Henry’s, she pushes him away.

Each character—Olivia, Juliet, Caitlin, Cooper—offer their distinct perspective on the roles they play in this complex and emotional tale. Dealing with three generations of women—each suffering with their own trials and tribulations—leaves the plot fully involved in the heart-wrenching details of the lives of all concerned. The mother-daughter connection has always brought angst to those involved, whether dealing with hurt feelings, jealousy, or misunderstandings, and is evident and easily relatable in this moving story. Between the colorful description of the location as well as the concerns of many characters, this title in the Cape Sanctuary series draws the reader in from the first page to the gratifying conclusion.