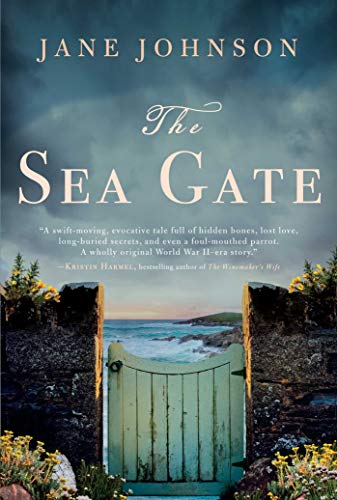 “a love story, and also as a glimpse of a small Cornish town during a tumultuous time in history, when a dramatic turn of events can change an isolated teenager into a daring young woman.”

Shortly after her mother’s funeral, while going through the contents of her apartment, Rebecca Young finds a letter from a distant cousin in Cornwall.

Perhaps that last is a reference to Gabriel, Olivia’s parrot who likes to shout obscenities at visitors—or perhaps he really meant Olivia herself.

Seeing this as a chance to forget her own problems for a while—she’s a cancer survivor with the specter of a recurrence looming—Rebecca decides to go to Cornwall and in doing so, changes her life completely.

She meets Olivia, is won over by the curmudgeonly old woman, and agrees to stay and help. Some of the requests Olivia makes about the house are odd. She wants the basement bricked up and no one is to go into it beforehand. Rebecca is willing to follow Olivia’s orders, until she has a reason to go into the cellar and discovers some bone fragments and part of a human skull.

“A crab claw, I tell myself. But crab claws are pink, aren’t they?

I remember Olivia’s instructions to BRICK UP THE CELLAR and I go cold.

Oh, Olivia, what have you done?”

Perhaps Olivia is really as batty as Dad thought.

When Rebecca hires local builder Reda Medjani to do the renovation, it’s soon obvious that this Algerian living in Cornwall is more interested in Rebecca than the house. Rebecca find herself returning his attraction.

It’s with Reda that Rebecca discovers the secrets Olivia and the house have been hiding since the Second World war—the story of a teenager left to herself when both parents enter the conflict, of being abandoned by the cousin expected to take care of her, and of finding love with an Algerian prisoner-of-war loaned out to a neighboring family’s farm.

With Hamid, Olivia will spend the “happiest and saddest” time of her life. In the few months they have together, the fugitive prisoner will give Olivia the courage she needs to express herself through her art as well as become the woman Rebecca will later meet.

That story didn’t end with the war, however, and now, with Olivia hospitalized, Rebecca and Reda must be the ones to protect her cousin’s home and her secrets and give her closure with the past and protection from the present—and there’s a very real danger in the present day.

This is a story that can be viewed on two levels—and each one is more than satisfactory—that of a love story, and also as a glimpse of a small Cornish town during a tumultuous time in history, when a dramatic turn of events can change an isolated teenager into a daring young woman. The author has chosen to combine both aspects of the story by interspersing chapters from 16-year-old Olivia’s life in the forties with Rebecca’s discoveries in the present and having Olivia’s love story cross generations to parallel Rebecca’s.

Olivia and Rebecca are much alike in their desire for freedom, as well as their love for the men fate has placed in their paths, and it’s this love that frees both to at last become whom they wish to be in life.

Though readers may think it unusual for a child, even a teenager, to be completely abandoned by parents for the duration of a war, perhaps it isn’t that odd because of the uncertainties during wartime. Olivia is definitely resourceful and shows her initiative in not only keeping authorities away with reasonable lies of why she’s alone but also in warding off those same authorities when Hamid is in hiding.

Some readers may argue that the story for Olivia doesn’t indicate a Happily Ever After ending; others will argue that Reda’s revelations bring a somewhat bittersweet closure to that long ago hidden year, while once more returns the freedom she and Hamid experienced.

The Sea Gate is a beautifully written story of two women’s courage.