The Sea Captain's Wife: A Novel 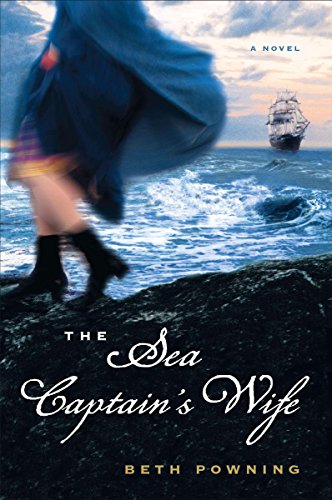 We think of the great multi-masted sailing ships of the mid-1800s as being entirely male domains; however, The Sea Captain’s Wife explores the sea-faring life from a woman’s point of view.

Surprisingly, many captains’ wives, and even children, traveled with them on years-long, globe-spanning voyages, since it was the only way a family could remain together. Ms. Powning vividly captures the physical and emotional perils newly married Azuba Bradstock faces as she tries to create a life with her sea captain husband Nathaniel.

Almost ten years her senior, Nathaniel sweeps the young, naive Azuba off her feet and into marriage. Although he originally agrees to take her with him on his travels, he changes his mind when she becomes pregnant, and sails away to continue his successful trade as captain of Traveller, his square-rigged merchant ship. Azuba is left to care for their ostentatious new house and make the monotonous, unsatisfying social rounds in New Brunswick, on the Bay of Fundy.

Nathaniel does not return until their daughter Carrie is three years old. As he makes plans to leave again, Azuba pleads with him to keep their family intact on board the ship. Nathaniel refuses, saying it is too dangerous. “She saw him become a different man. A man of absolute authority, who could wield punishment and fear, and was accustomed to doing so. . . . He became closed and hard. As he would be had he assessed a situation at sea and given his orders. He expected them to be carried out.” Azuba’s “sense of who she would be and how she would live was like a picture gone up in flames.”

Lonely in her husband’s absence, Azuba turns to the kindness and comfort of the Anglican minister. The young unmarried Reverend Walton appreciates facets of her mind Nathaniel never will, and offers a gentle friendship—or so she tells herself. Inevitably, she commits a thoughtless indiscretion which strikes so deeply at her husband’s pride that it nearly destroys their marriage. However, the scandal forces Nathaniel to take Azuba and Carrie with him on his next voyage.

Once the Traveller sails out of the harbor, the story seems to draw power from the sea, interweaving Azuba’s attempts to rebuild her relationship with Nathaniel with extraordinary descriptions of the wonders and dangers encountered by a wooden sailing ship tossed on the great oceans of the world. Ms. Powning vividly conveys the isolation, the frequent monotony broken by flashes of terror, and the constant struggle against the merciless moods of the elements. Rounding Cape Horn, the ship encounters a “snorter” of a storm:

“A wall of grey-black water towered ahead, crested with a white fringe. Traveller, even lying on her lee as she was, rose to meet it. Azuba was pressed back against the deckhouse wall as the bow lifted. The ship breasted the wave. From the swirls of mists and spray came another ship. It was heading directly toward them, flying before the wind, so close that Azuba could see the men on her decks waving their arms, mouths open in horrified, soundless roars.”

Somehow the collision is avoided and Traveller sails on. There are constant reminders of how fragile their survival is: sightings of a ghost ship run aground on an ice shelf, its masts glittering with ice, or an overturned wooden hull floating sluggishly on an oily post-storm sea.

At their various ports of call, Azuba meets other captain’s wives who travel with their husbands. In port, the wives are treated to luxurious hotels, beautiful clothing, and expensive jewelry, a stark contrast to the stripped-down, hardscrabble life they all lead aboard ship. Letters from home are eagerly received and skimmed swiftly for any bad news before being savored and replied to before the next leg of the journey. However, in three years of sailing, the Traveller stops only at Callao and the Chincha Islands in South America, San Francisco, London, Antwerp, Cape Town and Hong Kong, leaving long stretches between communications.

The dangers and isolation both bring the Bradstock family together and pull them apart. Nathaniel feels a double burden now: the welfare of his ship and the safety of his family. Azuba labors to make Carrie’s life as normal as possible. Yet slowly, they begin to meld into a family, as Azuba and Nathaniel begin to recognize and understand all the aspects of each other’s personalities.

Ms. Powning’s extensive research adds authenticity to this unusual perspective of life aboard a sailing ship. The most compelling scenes of the book take place at sea, supporting Azuba’s sense that her existence as a wife left behind would be flat and unsatisfying. Life on land consists of social calls, sightseeing, and shopping, all of which seem slightly insipid after the drama of storms and near-starvation. The reader is often eager for the characters to re-embark on their voyaging.

Of course, there is a price to be paid for leading a life of adventure, and Ms. Powning makes sure to exact it. No one survives these dangers untouched or unchanged.

The Sea Captain’s Wife is a gripping story, written with assurance and authority. It succeeds equally as a study of the difficulties of marriage, and as a tale of gritty adventure on the high seas—with the particular fascination of being experienced from the female perspective.