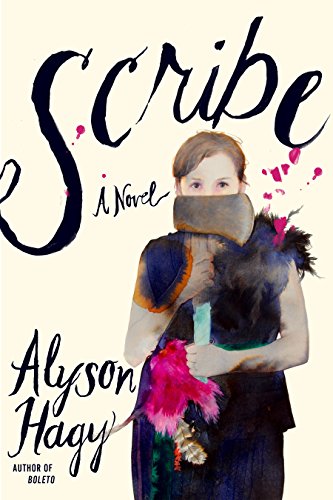 Reading Scribe, Alyson Hagy’s slim, dystopian novel, it’s difficult not to hear echoes of Cormac McCarthy’s eerie, early Appalachian writing. Although Hagy has clearly created a work of imagination, she writes with the infused, dark, Scotch-Irish sensibility of someone raised in southwestern Virginia’s Blue Ridge Mountains, as she was, steeped in her farm family’s lore.

Scribe is set in a post-apocalyptic, post-civil war landscape, depopulated by fever, impoverished and anarchic. It is without local government or currency, reduced to the crude exchange of goods and services. In language that is both lyrical and hypnotic—sometimes bordering on the elliptical—Hagy tells the story of an unnamed woman, alone in an environment otherwise untethered to a more specific location or time period. Here she clings, fiercely if precariously, to her family’s rural, brick homestead.

“For years she had vowed to stay here, whether they came to burn her or bury her or lift her onto some imposter’s bier. She had made the house, its crime and mythologies, both her penance and her grave because that was the only atonement she could imagine . . . She had protected herself by bartering the only gift she had, the ability to write letters on behalf of the guilty and the possessed.”

The coin of her realm is to “write out a man’s pain and ease it from his heart forever.” Thus, a grizzled, cryptic stranger calling himself Hendricks comes to her, asking her to help him compose a confessional letter. He is desperate for her to write, memorize, and burn the missive, and then to recite it at a distant crossroads. Warily, she replies: “You came to me for relief. Maybe I seek the same thing. But relief is the pearl without price in this place. Just wishing for it becomes a curse all its own.”

As the relationship deepens, it takes on a fractious and surreal dimension, bringing back to life the woman’s saintly sister, her death a betrayal, as well as a youthful incarnation of the desperate man, who acts as a guiding spirit. In the final third of the book the action accelerates as danger closes in around them, building to a violent, explosive conclusion.

At times, the narrative can be both sketchy and challenging, but well worth the effort.

Scribe comes highly recommended, listed as number-one on the Winter 2018–2019 Indie Next List for Reading Groups, compiled by independent booksellers, and touted by the likes of Vanity Fair’s fall preview—all with good cause.

In an interview, Hagy acknowledges that Scribe is “an odd, knotty little book,” inspired by a drive she took to the farm in Job, West Virginia, where her parents now live.

On the back roads she observed “all of these abandoned, failing farms that I think were great and thriving in the late 19th and most of the 20th century and aren't really anymore. And I started imagining what those communities must have been like, particularly the bartering and sustainable communities that would have been there; they would have been pretty isolated.”

Scribe also has a biblical feel to it, which is no coincidence.

Described as “an American realist,” Hagy tells the interviewer that, “When I was a really little kid, I cut my teeth reading the Bible and going to church pretty much every Sunday, and the Bible is filled with odd stories.”

Scribe is one more, not to be missed.