The Scribe: A Novel 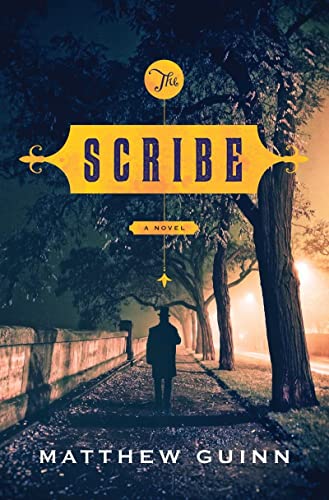 “A marvelous historical mystery, but not for those who want their violence candy-coated.”

If Matthew Quinn’s first novel, The Resurrectionist, was worthy of being a finalist for the Edgar Award, then his second novel, The Scribe, should surely make the cut as well.

Set in an Atlanta that still shows the ravages of the siege ordered by General Sherman during the waning days of the Civil War, The Scribe blends social history with the military events and personal choices  which shape the post-war life of Thomas Canby. The choice that most defines his character in the opinion of those who count in Atlanta after the war, is Canby’s joining the Union Army instead of supporting the Confederacy. But it is not strong abolitionist views that drive young Thomas Canby into the Yankee ranks, but something more fundamental in human nature.

“Should say, I suppose, that I was driven to join up by something akin to that darkness, on a fool boy’s errand of vengeance, after my father’s death in the siege of ’64.”

It is that darkness that Thomas Canby speaks of in his papers about the horrible events in Atlanta in 1881 that lies at the heart of Mr. Quinn’s gripping novel. “But what I learned in Atlanta in ’81 was that what we’d seen was only the shadow of evil, its coattails at the most. When I really saw it for the first time clean and clear it was not a shadow . . . It was in the flesh, real as dirt and cold as gunmetal . . .”

Thomas Canby is vegetating as a sheriff in a rural Georgia county nearly four years after his forced resignation from the Atlanta Police Department on false charges of corruption. Smarting from his disgrace, he jilts, or as good as, his fiancée, Julia. When he receives a telegraph from his old boss and Chief of Police in Atlanta, asking for his help in an important case, Thomas sees it a chance to clear his name and be a fit suitor for Julia.

As usual Thomas is hiding other motives for his behavior that he doesn’t admit. He wants the excitement of Atlanta and the sense that he is doing more important work than tracking a cougar guilty of stealing a local farmer’s pigs. As it turns out his old boss Vernon wants him for a special reason that doesn’t have as much to with Canby’s detecting abilities as with his peculiar beliefs about negroes.

A madman is loose in Atlanta and killing wealthy negro businessmen, mutilating his victims’ bodies, and cutting a letter of the alphabet in their foreheads. To placate feelings among Atlanta’s negroes, Vernon has promoted a black janitor at the courthouse to the detective squad to help investigate the murders. “I sent for you because no one else will work with him,” Vernon said, lighting a cigar.

With all of Atlanta, or those with money invested, promoting the International Cotton Exposition, no one wants a killer with sharp blade wandering the streets looking for victims. It looks bad for the city and may stir up bad behavior in the negro population. The Atlanta city fathers, best known informally as “The Ring,” want the perpetrator caught, tried, and hanged as soon as possible. It was members of The Ring who were partly responsible for the trumped-up corruption charges against Thomas, so he dislikes and distrusts its members.

At a dinner meeting with The Ring Thomas sits through a speech by Henry Grady, publisher of the Atlanta Constitution, the city’s leading newspaper. “The Negro, the scalawag, the Radical, were swept out of office and white southerners once again claimed their birthright.” Thomas is white and a southerner, but his joining the Union Army makes him an outcast, though not as much of one as Leon Greenberg, a Jewish businessman originally from Brooklyn.

Greenberg, the owner of a newly built pencil factory and a wealthy man, reminds everyone that the International Cotton Exposition is deeply in debt and may be a failure. “Canby knew the man must indeed be a late arrival to Atlanta, for since his own childhood he had been raised among a tacit but bedrock understanding that disparaging capital in Atlanta was anathema.”

A young negro prostitute is found murdered with still another letter of the alphabet carved in her forehead. As Thomas leaves for the murder scene he considers whether Vernon’s suspicion that Cyrus Underwood, the new and only negro detective could be the murderer. But why? What was the motive? And what word is the murderer spelling out on the bodies of his victims?

Then a young white girl is found dead and “interfered with” in Leon Greenberg’s factory, and a black janitor and another factory girl accuse Greenberg of making advances to female employees. Canby believes Greenberg is innocent, but he is tried and convicted. A mob breaks the factory owner out of jail and lynches him. Vernon and Thomas arrive too late to stop the mob. Thomas tells Vernon: “This is not over. Innocent blood, Vernon.”

The horror continues as Thomas is captured by the real murderer, a flesh-and-blood creature of the darkness that Thomas first felt during the war when he first learned “That you can get away with damned near anything.”

The Scribe is an eloquently written historical novel that is compelling reading. It is both fiction and history mixed together in a suspenseful mystery that keeps the reader guessing nearly to the end. Of particular power are the scenes featuring Leon Greenberg.

Based on the historical events which led to the trial and subsequent lynching of Leo Frank, Mr. Quinn’s retelling of the tragedy not only fits the storyline, but also emphasizes the religious and racial bias that the Civil War failed to eradicate. A marvelous historical mystery, but not for those who want their violence candy-coated.