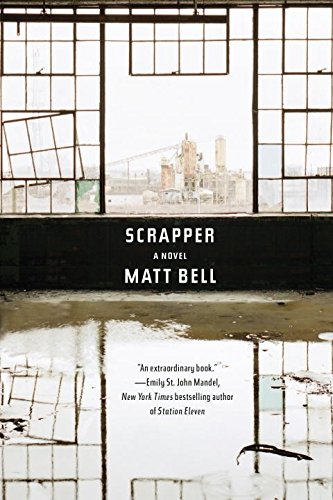 “See the body of the plant, one hundred years of patriots' history, fifty years an American wreck.” Set in Detroit after a devastating economic collapse, Matt Bell's Scrapper is the story of Kelly. A former college wrestler and construction worker, Kelly works as a scrapper in “the zone,” a designated area abandoned by the government. He scavenges for metal and other valuables, selling the material to brokers for whatever cash he can get. The lonely and dangerous work keeps Kelly occupied until one day he comes across an abandoned house. Finding a young boy chained to a bed in the basement, he rescues the boy.

After the rescue, Kelly becomes an overnight celebrity. The fame means he has to abandon his life as a scrapper, eventually getting a job working on a demolition crew. He does degrading work, much to the chagrin of his fellow workers. Remaining silent, he is haunted by the memories of the chained-up boy. His soul becomes the battleground for two sides of his personality, the scrapper and the salvor.

These forces become more acute as Kelly takes the boy into his life, inviting him over after school, to the dismay of the boy's parents. His emotional attachment feeds into his desire to seek vengeance. As good as he was to save the boy, he also craves to enact violence upon the boy’s captor. The Detroit Police have no leads, his girlfriend doesn't think this is healthy, and he begins to spend his spare time in the boxing gym. In the gym, he prepares.

Matt Bell's melancholy ode to Motor City walks the fine line between literary fiction and genre fiction. Scrapper exists beneath the shadows of Ernest Hemingway, Norman Mailer, and Cormac McCarthy. It is a novel examining the crisis of modern heterosexual masculinity, itself a mirror of neoliberal capitalism. A husk of a man drives around scavenging a husk of a modern metropolis. The novel explores what it means to be a man, but it also works with diligence to eviscerate this medieval notion, to shine a light into the hollow posturing, the macho bluster, and the animalistic violence.

Like other examples of literary fiction, Scrapper glimmers with polished sentences and an artful dissection of the main character. Kelly's journey into the dark night of the soul brings parallels to Mailer's An American Dream and Bret Easton Ellis' American Psycho—except in the case of Scrapper, the economic collapse has laid bare the violence and brutality that kept the system afloat. Kelly survives “the zone” with his wits, his tools, and his fists. Soon enough he realizes even these blunt instruments aren't sufficient.

But literary pretention becomes Scrapper's undoing, with needless digressions to scenes in Gitmo, Miami, and Ukraine. While each of those scenes is beautifully rendered and offers a rather on-the-nose critique of the various sicknesses permeating our culture (waterboarding, George Zimmerman's vigilantism, Chernobyl's abandoned landscape), it ruins the novel's taut narrative flow.

But this is the impasse in literature: beautiful prose in isolated sections or ramping up narrative tension. Unfortunately, in this case, there can't be both. Despite these demerits, Scrapper remains a highly recommended read. It is a fictional glimpse 20 minutes into the future, staring into an economic abyss with a city abandoned by its leaders.