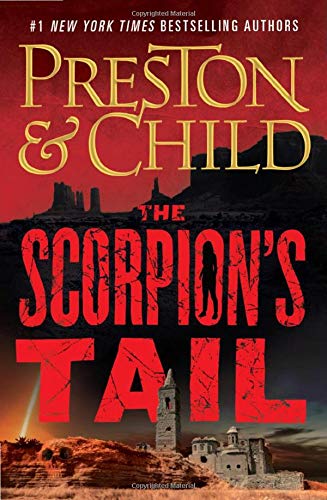 “Preston and Child have designed an intricate thriller that takes several twists and turns, but never totally diverts from the crux of the story.”

Rookie FBI Special Agent, Corrie Swanson, is convinced that her fledgling career is at its short-lived end when she messes up what should be a simple response to a hostage situation. Although it’s not as bad as she senses it is, Corrie’s boss, Supervisory Special Agent Hale Morwood, assigns her to work with Homer Watts, a local sheriff, who responded to a call at a distant ghost town, High Lonesome, and ended up shooting a would-be relic hunter.

Upon meeting Sheriff Watts at the scene of the event, she soon discovers that the assignment is more that anyone anticipated, when a mummified body is uncovered in the town. The mummy is at least seven decades old with skin and clothing still on the body—a body that is clutching a gold and jewel encrusted cross.

Recognizing that this is a scene with archeological implications, Corrie calls upon her erstwhile acquaintance, Dr. Nora Kelly, a skilled archaeologist, to answer the questions that begin to surface. Conflict between the two women creates a tension that they each know they must get beyond.

And so, a series with two investigative women in two different fields, begins.

Preston and Child have developed their characters with care, creating two strong women each with her own flaws. As other characters come on the scene, it is hard to determine who, exactly, is the antagonist as once again each character is given depth and the traits to be the bad guy: FBI Specialist, Brad Huckey; General McGurk, head of the White Sands Military Base in New Mexico; Jesse Gower, a meth addict and the only descendent of the dead man; or Charles Fountain, Esq., lawyer and local historian. Or is there someone else with a deeper involvement?

But the primary question remains—what was this man doing in a ghost town seven decades ago and how did he end up dead and mummified?

Just when the reader thinks not much more can happen, Preston and Child throw a wrench into the works: radiation poisoning from an atomic blast 75 years earlier turns out to be the victim’s cause of death.

The point of view moves back and forth between Corrie to Nora, as multiple clues are laid before the reader and the tension in the story rises and lowers to many levels, but it is nonstop.

The sudden deaths of other minor characters create more havoc, with the primary characters trying to determine if and how these deaths are related to one another, and why. As Corrie attempts to explain the muddle of activities to Morwood: “Think about it, sir—we’re dealing with a potential scandal in that the Trinity test actually caused a fatality, a fake army MP murders one of our suspects, we’ve got irradiated human remains, and now somebody tortured and killed one of our informants.” Is it a series of unrelated deaths, or not?

As Corrie and Nora dig deeper into the mystery at High Lonesome, the authors take the reader around another corner. The mystery of the Victorio Peak treasure rises to the surface raising more questions. Is there a relationship between the 17th century treasure and the mummified man, and after so many unsuccessful attempts by treasure hunters to find this treasure, does it really exist? Preston and Child create enough red herrings to leave the reader scratching their head—one moment yes, another moment no.

The authors create scenes that, at first read, appear to add little or no value, but by the end of the story, the importance of those scenes becomes undeniable.

The reader acquires a strong sense of participating in the story through many of the writers’ skills. In particular, the description of the various locations is precise to the southwest. Preston and Child add just enough history of the area to give the reader the sense of being there, seeing the desert, the ghost town, even the local bars. Yet the history does not override the path that the story is taking; it’s just enough to give added dimension to the story.

Preston and Child have designed an intricate thriller that takes several twists and turns, but never totally diverts from the crux of the story. This is a series that demands attention.