A Scone of Contention: A Key West Food Critic Mystery 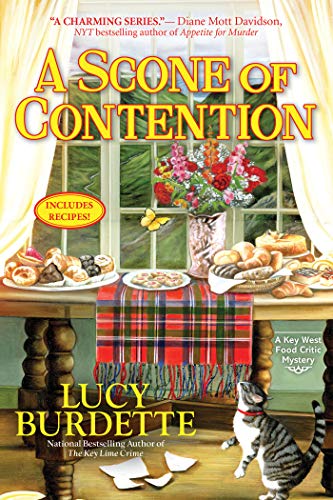 “Although Burdette wanders back and forth between the Scottish history and the actual attempted murder and the real murder, she does so with clear writing and enough clues and action to keep the reader interested.”

As cozy mysteries go, A Scone of Contention by Lucy Burdette moves a bit away from the familiar formula but stays close enough to stay in the running.

Set in Key West, Florida, and the Scottish Highlands, Hayley Snow and her new husband, Nathan Bransford, plan a honeymoon at his ancestral home in Scotland. Oddly enough, they are accompanied by her good friend, Miss Gloria (an elderly lady) and her mother-in-law Helen.

The story opens with packing for their trip when a messy event involving her friend Connie’s husband Ray occurs. He attempts to shoot another person at his art gallery. Ray shares nothing about how the shooting came about.

Hayley has no time to investigate the situation and must leave her friends behind to resolve it themselves. Upon their arrival in Scotland, Hayley and Nathan learn that all of their time has been planned for, and much of it is not as a newly married couple.

Hayley learns that her sister-in-law Vera, is deeply involved with three other friends (Ainsley, Glenda, and her husband Gavin) on a book project designed to introduce the reading public to the “thin” places in Scotland, places where this world and the otherworld tend to join or overlap. The project is not going well. Gavin and Glenda are attempting to redesign the entire project, much to Vera’s annoyance.

On their first night they attend a dinner party thrown by Ainsley, where Glenda eats poisoned food and barely escapes with her life. Curiosity rises as Hayley begins to look at all of the dinner attendees with an investigative eye.

And this is where Burdette veers from the standard cozy formula. Nathan is sidetracked by his brother-in-law to play several rounds of golf, effectively moving him out of the story—or at least to the very outskirts of it. Vera and her project coworkers have to visit several “thin” places for their book, and Hayley, Helen, and Miss Gloria are dragged along.

Going forward from this point, much of the book provides the reader with Scottish history and well-designed description of the country. But not getting too far from the cozy requirements, Burdette throws in a murder of a total stranger. Well, perhaps not entirely total, but enough to raise Hayley’s curiosity.

Then the book melds the scenery and history with the death of a man who Hayley knows is familiar to the other four, but she hasn’t figured out how. Although Miss Gloria stands in as the requisite helpful buddy, she really provides little or no investigative assistance, and Hayley is on her own.

Although Burdette wanders back and forth between the Scottish history and the actual attempted murder and the real murder, she does so with clear writing and enough clues and action to keep the reader interested.

Throughout the story Burdette has included a horrifying situation that involved Vera as a young teenager, and that needs to be resolved. And let’s not forget the Key West shooting. As the book winds down and the travelers return to Key West, the issue of Ray’s shooting still lingers. At first blush, the reader might think that Burdette designed this as an introduction to her next story, but it does not turn out to be. The art gallery shooting is explained at the end, so no intro to another new book. One wonders why this was important, and it seems to have just taken up space for no particular reason.

Other than that, A Scone of Contention is an interesting read and a delightful trip through Scotland. And the book finally ends with several Scottish recipes that will be worth investigating themselves!