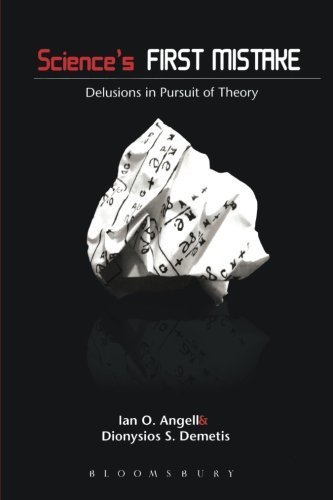 The book doesn’t begin in the Middle Ages with Thomas Aquinas or Robert Grosseteste. Not overtly, anyway. It begins by describing what the authors see as the role that information plays in modern society and how information is processed and communicated—and the limitations that come with this process and communication.

Science’s First Mistake is their response and their own “skeptical viewpoint” and “cathartic” exercise about the understanding of information, science, and technology. Their major fear? That society is cavalier in its dealings with information as a unit of knowledge and that, generally, people simply have insufficient skepticism regarding science as the ultimate arbiter of knowledge or ”truth.”

The construction of knowledge is hardly a new topic—explanation of thought has been kicking around from Socrates and the School of Athens, finding its intellectual way with the rise of universities. It is still hotly contested among philosophers today, from ethics to aesthetics to philosophy of mind. Despite differences in historical settings, certain elements and questions are applicable throughout a variety of these settings. Aquinas’s concern about man’s natural capacity to understand and Nietzsche’s apprehension with various methods of knowing share a similar intellectual context: They provide a foundation for epistemology in their respective popular cultures. In medieval universities, the curriculum was laid out in the form of a trivium: grammar, logic, and rhetoric.

The authors are particularly concerned with how information in science is understood and regarded by people—and held hostage at the hands of authoritative scientists. The authors see their work to be, at heart, an endeavor that highlights what they consider paradoxes in how people think about knowledge and information. “The book reflects on the limitations in the processes of constructing knowledge, as well as in the methods used to gain that knowledge: epistemology.”

Although, the work often conflates the issues of how and whether we have genuine knowledge, the argument in Science’s First Mistake can be summarized something like this: Information is seen as units of knowledge that are communicated to people through several venues—media, books, academic endeavors, etc. (What we have been calling here “rhetoric.”) This is particularly true in terms of science and technology where the concept of “uncertainty” is dealt with differently than in other branches of “knowledge building;” arguments about how to cope with that uncertainty are not standardized, uniform, or templatic in any way. (The “logic” or dialectic structure of knowledge construction is difficult make sense of.) As such, we need a common “language” for deconstructing the texts of knowledge.

The authors propose Systems Theory in Information Studies as the best candidate. (Here, the “grammar” of Systems Theory ought to sort out the disparities between knowledge and text.) In short, the trivium the authors utilize has its three prongs securely based in how they have defined science and information. The authors, Angell and Demetis, use several classic examples of uncertainty in knowledge, drawing heavily from the physical, natural, and social sciences. Indeed, it would be tough to imagine a book focusing on uncertainty, the deconstruction of scientific knowledge, and information that didn’t fall back on the tried-and-true “waves and particles” debate in physics the ramifications of the “butterfly effect” in biology, and the persecution of Galileo within the history of science. These examples and others are all consistently set against the backdrop of a liberal 19th century Romantic integration of Nietzschean philosophy.

The authors take an extremely populist view about the definition and construction of science. If this perspective and argument is the reader’s own view of the inner workings of the social and natural sciences, then the argument that the authors have verbalized is a useful and re-affirming one about science as an authoritative figure with delusions about the extent of its knowledge and influence. If this starting premise about the nature science isn’t shared, then the book reads like a series of strawman arguments constructed to confirm the authors’ axe-grinding about the philosophy and understanding of information within modern culture.

Regardless, the questions posed by the authors in their book are important. They are also a good reminder to constantly consider the dialectic between knowledge, authority, and its relationship with certainty.

Indeed, as their philosophical superman would observe, “Convictions are more dangerous enemies of truth than lies.”