Science: A Discovery in Comics 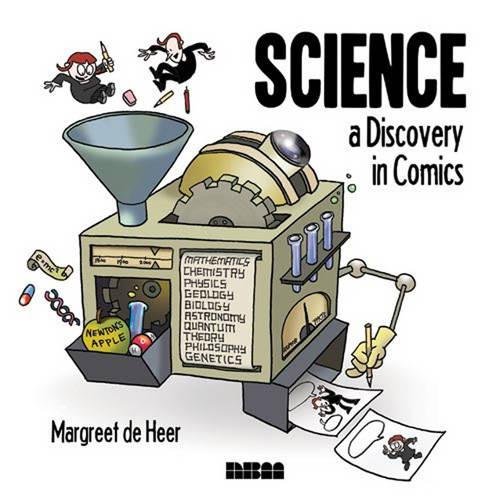 The cover shows the narrators jumping feet first (and wearing big, broad smiles as they do) into a big machine that seems to be tracking a neverending ribbon with the general titles of branches of science. The smiles found on the faces of our narrators set the stage for a mind-warpingly fun trip through both the history and the various worlds of science.

With a balance between humor and facts (the machine has a needle showing us that balance!) artist and writer Margreet de Herr takes us on a journey across the millennia and through space and time. Along the way we meet Aristotle, DaVinci, Bohr, Copernicus, Al-Khwarizmi, and many of the others who have significantly shaped out lives over the years.

We learn where numerical symbols came from as well as what was one of the main incentives behind the invention of the computer was. (India and a burning desire to find out how far we can calculate pi.)

Joining Ms. De Heer on this wonderful journey is her colorist and husband Yiri. Together they openly acknowledge their own shortcomings about subjects as they dive in head first to the rich history of science itself.

The lighthearted tone of the book is emphasized by the narrators’ admission that, at first, they didn’t have a real game plan or anything near the professional qualifications to take on such a subject.

It is this freedom from preconceived notions that makes what they are saying so exciting to read. It is as if we are finding out the facts as they are. A writer more grounded in the traditions of academia and strict research wouldn’t be able to make this trip so much fun.

A big part of the appeal is Ms. De Herr’s artistic style. The humans have round edges and three fingers. Their facial features are lines and dots. They may look cartoony, but don’t let the simplicity of the characters and animals fool you. Ms. De Herr knows how to pull out all the stops when she can.

In an early, full page drawing she creates a drawing that expresses exactly what science is. She takes us into space where we see a full quarter of our glorious planet. Bringing together different medias she gives us weather maps, streaming data and tickertapes, an X-ray machine, a computer screen, maps of the stars and the periodic tables as well as tools such as a microscope, beakers, boats and a broom. The drawing perfectly captures almost every single part of this complex study.

And inside it all are cute, round little men and women floating in space, working at stations and in labs and driving a boat. The drawing gives a real sense of adventure and excitement to the field.

That energy carries us through the book as she uses the wide-ranging styles of the graphic novel and comic medium to her advantage. We see traditional panels and word balloons followed winding routes of narration that resemble a board game like Chutes & Ladders.

When she address the importance infinity she creates a Moebius strip, emphasizing the never ending idea of time itself as well as the numerical concept of infinity. We stay with her because, though the page looks at first to be illogical or confusing, she makes it work perfectly.

There is a chart of the history of the Earth that reads like a roller coaster ride to the center of the planet itself. Like many of her two page spreads this could easily find a home in the most serious of classrooms.

Despite the occasional dips into a slightly surreal representation of content, everything she tells us hangs together in a coherent and very precise way. The tight organization of what she is presenting, and there is a LOT of information racing by, holds everything together.

You may be laughing and admiring the imagination, but you are also learning what pi really means! The way she uses art to punch holes into the idea that the Dark Ages was a time of non-discovery is fascinating.

With so much serious information presented in such a non-confrontational manner you find yourself understanding what Einstein was talking about. You can’t help but smile when you find the TARDIS on a chart about time and how it moves in space.

If you find a better, more understandable explanation of the space-time continuum and how the idea is relative to Einstein I would be surprised. You can watch a hundred TV specials on waves and particle and read a hundred books, but nothing will help the layperson understand the complexity of quantum theory better than the drawings she has created.

The book erases artificial boundaries of religion and governments and reminds us that the world of science is all inclusive. It has taken the combined efforts of everyone across the planet to get where we are now.

In the end Ms. De Herr looks to the future with hope and a bit of dread as well. After everything she has shown us it is easy to understand why both emotions are present. For the most important part of the story is us humans.

We can be greedy, stupid, blind to the obvious and driven by obsession. But we are also nosy little round lumps of blood, bone, and skin that have an insatiable desire to just know, to get better, and to help each other.

Scientists are driven in the same manner that a mountain climber is driven to scale a peak because they both have to know they can do it or find it or solve it. Science: A Discovery in Comics is a book that will inspire both five year olds and their grandparents as they laugh along in discovery.