The Schooldays of Jesus 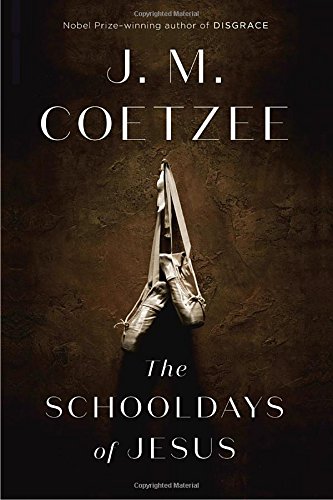 “The Schooldays of Jesus explores a striking quest for meaning.”

Nobel Prize-winning Author J. M. Coetzee’s latest book, The Schooldays of Jesus is a novel charged with philosophical debates and arguments that leave the reader dizzy and wondering whether the novel can even be counted as a novel. In typical Coetzian-fashion The Schooldays of Jesus is driven by the power of ideas rather than the plot itself. An exploration of the nature of the world and of human nature, the novel pits passion against reason and fantasy against reality.

Long-listed for the Man Booker Prize, The Schooldays of Jesus picks off right where The Childhood of Jesus left off. The last we had seen of the three protagonists of the novel, David, Simon, and Ines, the three were fleeing from the law. In The Childhood of Jesus, Simon had encountered David, a motherless refugee, on a boat to a “new world.” In this new world, Simon had taken charge of David, the would-be Jesus and soon after appoints a virginal stranger, Ines, as his mother.

The three had quickly formed an odd yet somehow harmonious family and had become an interesting allegory for the Holy Family. Their family life had been disrupted, however, when David refused to obey the education system of the intensely socialistic and collectivistic world that they lived in. When this very society decided to send David to a reformatory, the “Holy Family” had decided to escape to the town of Estrella, which means “star,” where they hoped to embark on a new life.

If the driving force of The Childhood of Jesus was the debate between individualism and collectivism, the driving argument of The Schooldays of Jesus is one between passion and rationality. Passion and rationality, fantasy and reality are frequently pitted against one another in the novel, creating two distinct ways of knowing the world. In nowhere is this so obvious as it is in the education David receives.

Upon the family’s arrival in Estrella, David is enrolled in the Academy of Dance. The Academy is built to instruct its pupils in “the dance of the universe” and is founded on the belief that the dance “maps out the higher realm of the universe.” As the best dancer in the Academy, David quickly becomes the embodiment of this higher realm. With a natural affinity toward passion, fantasy, imagination, and inquisitiveness, David is the passionate dreamer himself, just like his hero, Don Quixote.

In contrast to David, Simon is firmly rooted in the realm of reason and rationality. A member of the “measurable universe,” as Metros puts it, Simon is a pragmatist and a realist. He is often irritated by David’s imaginative nature—his “silliness” as he puts it—and is frustrated by David’s claims that he does not know him.

As the novel progresses, Simon becomes more and more upset that David refuses to see in him a role model and embrace the rational world. In a sense, Simon is the exact opposite of David, the Sancho Panza, to his Don Quixote, ever faithful but far removed from passion and fantasy.

This longing to understand comes to its climax through Simon’s interactions with Dmitri. When Dmitri, the guard at the art museum near the Academy, murders Ana Magdalena in a crime of passion, Simon finds himself repulsed by Dmitri. In view of Dmitri’s actions Simon attempts to explain the concept of passion to David as a definitively negative thing. But when David refuses to accept this explanation and continues to demonstrate his unwavering affection for Dmitri, Simon becomes lost and perplexed.

When their paths cross once more, Dmitri accuses Simon of having an unfeeling, passionless character. Affected deeply by this accusation, Simon is forced to turn inward and re-examine himself.

Simon’s quest leads him to a writing course, where he hopes he’ll be better able to understand his “self” through his prose. The work that Simon puts forward is so removed from emotions that it demonstrates just how unfeeling and passionless he has become. Confused, Simon drops out of the writing course.

At the end of the novel, Simon’s desire to understand leads him to the Academy itself. At the Academy, Simon begins to take dancing lessons and, abandoning himself to music, he finally rejects the “measurable universe” and embraces dance until “bliss washes over him.” In embracing dance, Simon also embraces David’s world as his own and, in a way, becomes David’s first convert.