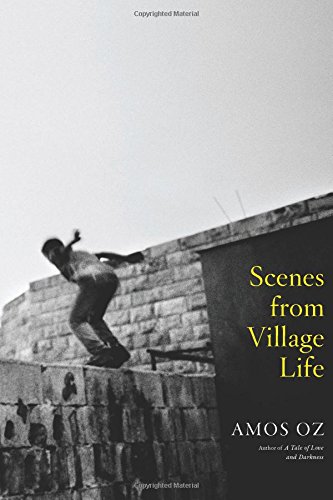 Something is not right in Tel Ilan, the fictional Israeli village set in the Manasseh Hills (probably in the general vicinity of Rishon L’Tzion) in which the first seven of the eight stories in Scenes from Village Life, Amos Oz’s book of linked tales, take place.

Formerly married, middle-aged singles move in with elderly parents; people demonstrate an insufficient sense of privacy, allowing strangers to invade their premises and personal space; a middle-aged bachelorette physician waits for her sick nephew— who never arrives; a wife sends her husband a message not to worry about her (which prompts him to do just that) and then disappears; a middle-aged couple cannot emotionally recover from their only child’s suicide (perhaps not so farfetched); and a socially isolated teenage boy becomes infatuated with a 30-year-old divorced librarian/postmaster.

Loneliness, lethargy, depression, and vague but unmistakable feelings of anxiety pervade most of the characters and the overall mood of the book. These senses of aloneness, isolation, and unease are reminiscent of the short stories of Anton Chekhov and Sherwood Anderson. Mr. Oz’s stories almost have a sense of the uncanny yet contain no supernatural elements.

Tel Ilan was founded a century ago by Zionist pioneers on what was uninhabited land, thus not displacing Palestinians. In the 21st century, as in Yael Hedaya’s Eden [also reviewed on New York Journal of Books], older farm houses are being purchased and demolished by affluent urbanites who replace them with multistory villas, some of which are vacation homes.

But where in Eden the main characters are the affluent newcomers, in Scenes from Village Life they are mostly the older veteran inhabitants who are ambivalent about both the real estate developers who are transforming their village and the weekend and holiday visitors from Tel-Aviv and overseas who patronize its wineries, gourmet shops, and galleries.

In the words of the local realtor,

“Here in the village we almost all know one another. Some people resent my buying up the houses in the village and selling them to outsiders, who build themselves weekend homes or holiday villas. Soon the village won’t be a village anymore; it’ll turn into a sort of summer resort. The older inhabitants are unhappy about this change, even though the newcomers have made the village rich and turned it from a forgotten backwater into a place bustling with life, at least on weekends. Every Saturday, lines of cars arrive in the village, and their passengers visit the boutique wineries, the art galleries, the stores selling Far Eastern furnishings, and the cheese, honey, and olive stalls.”

Several of the seven Tel-Ilan stories end with its main character assuming a recumbent position, getting under a blanket, or adding an extra layer of clothing like a traumatized child or a little kid trying to evade responsibility for a misdeed. They appear to have lost not only the ability to accommodate change but also the will and indeed a reason to be active agents in their own lives. Frequently a character decides to do or not do something but does the complete opposite despite him/herself: “I made up my mind to thank her, take my leave and come back another day, but my feet followed her into the house of their own accord.”

Nor can they comfort one another. In the words of an elderly parent who shares his home with his widowed middle-aged daughter and her Arab student tenant, “‘Poor wretches,’ he mumbled, ‘they’re really out of luck, lonely to the marrow of their bones, abandoned from their mother’s wombs, no one can stand them. No one can stand anyone anymore. Everyone is a stranger to everyone else. Even the stars in the sky are alien to one another.’”

His observation confirms the conclusions reached by the Arab university student who is conducting a comparison of life in Arab and Jewish villages:

The narrator of the penultimate story seems to confirm this when he observes, “Inside everyone, I thought, there is the child they once were. In some you can see that it’s still a living child; others carry around a dead child inside them.”

“What’s the good of all this chatter? The sun is up, the white man who was there, or who we imagined was there, has disappeared behind the bog. Words won’t help. Another hot day is beginning and it’s time to go to work. Whoever can work, let him work, put up or shut up. And whoever can’t work anymore, let him die. And that’s all there is to it.”

Put up or shut up. Work or die. As a man of the left perhaps Mr. Oz sees those as the choices to which the free market economic policies championed by Prime Minister Netanyahu and his Republican allies in this country inevitably lead.

Mr. Oz completed these stories before the economic justice demonstrations that started in the streets of Tel Aviv during the summer of 2011 and are now echoed in the Occupy Wall Street demonstrations of 2011. Perhaps in one of his future books Mr. Oz will indicate whether he sees in those social movements the idealism and will to act of which his characters in Scenes from Village Life seem incapable.

Fans of Mr. Oz’s novels and his memoir A Tale of Love and Darkness will find this book lacks the narrative and psychological complexity of those longer works—but that’s not a fair comparison. Although the main characters of these stories make cameo appearances in subsequent stories and the stories share themes and moods, Scenes from Village Life is not a novel in stories but rather a book of linked short stories, and as such is recommended to all readers of short form fiction.