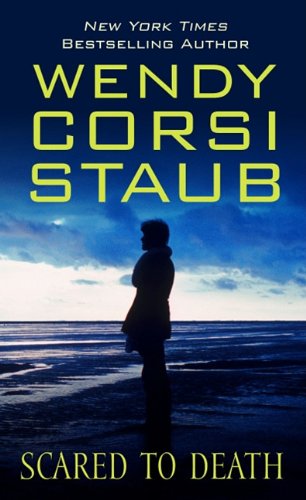 We all want to believe our daily lives are secure and that monsters are figments of our imagination. In Scared to Death, Wendy Corsi Staub portrays the longing for normalcy in the face of stark evidence to the contrary. Two mothers have experienced the destructive force of evil, yet they cling to the notion that they are now immune because no one should have to endure such horror twice in a lifetime.

Elsa Cavalon—and her husband Brett—would rather think she is having a nervous breakdown than believe their foster daughter Renny is in danger, despite Renny’s insistence that a “monster” was in her room. A broken branch and a footprint outside her window could have been coincidences, or, even worse, could have been planted by Elsa in the grip of a dissociative episode. So Elsa and Brett try to convince themselves otherwise.

A rat could have crawled into the purse of Marin Hartwell Quinn’s spoiled teenaged daughter while she sat in a Manhattan Starbucks. When faced with evidence that someone deliberately placed it there as a threat, Marin chooses to drug herself into oblivion rather than accept the terrifying truth.

Both of these women have direct experience with the reality of evil. Jeremy, Marin’s biological child and Elsa’s adopted son, was kidnapped and murdered by his own father 14 years before. Or so they believe.

The reader knows better. Jeremy is a grown man with a newly reconstructed face. His life since the kidnapping has been horrific until this point. When he walks out of the hospital after his plastic surgery, he is free to revisit the distant past he is just beginning to remember clearly.

Ms. Staub peoples her story with a large number of characters, carefully weaving a fabric of connections between them. A social worker is brutally attacked. A Boston private investigator buys a ticket to Mumbai. A rebellious high school girl meets a handsome college student over coffee. A nosy neighbor plants an herb garden—all of these events are integral to the unfolding story and serve to keep the reader engrossed in the guessing game.

Always at the center of this tightly woven fabric is the tragedy of Jeremy and his two mothers, drawing the threads into a gradually emerging pattern of revenge and madness. The tempo of revelations is skillfully controlled, coiling the tension ever tighter. Each new connection gives the reader a sense of satisfaction, and leads naturally to the next one. Ms. Staub’s pacing is impeccable, and the climax seems utterly right and inevitable.

The narrative shifts from character to character with increasing frequency as it builds to the denouement. While the author gives each person she introduces several distinguishing characteristics, their speech and thoughts lack distinctive styles. The half-French, fiercely maternal Elsa Cavalon has nearly the same diction as the teen-aged brat Caroline Quinn. Given the size of the cast, it would have been helpful to the reader to differentiate their voices somewhat more vividly.

Scared to Death is the second in a series of three connected novels, and it occasionally suffers for that. One character who would seem to loom large in the events of the novel is conspicuous by his total absence from this book, while another character appears here but contributes little to the story. Evidently both played significant roles in the first novel, Live to Tell, which perhaps explains their participation or lack thereof in Scared to Death. Since much of the first book’s story is necessarily revealed in this sequel, it is advisable to read the series in order.

All in all, Ms. Staub gives the suspense reader a satisfying thrill ride in Scared to Death. She turns the world of normal family life into a nightmare of violence and loss, forcing us to believe in the evil in our own backyard.