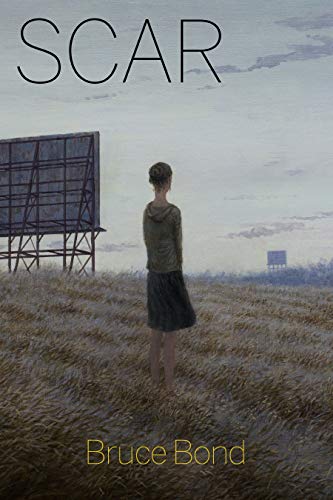 “we are the beneficiaries of not only the hard-won wisdom of a life well-lived but the tonal and thematic variations of a musician poet attuned to the nuance of the pain we, each of us, carry within and the complexity of the scars we share with each other.”

“The world breaks everyone and afterward many are strong at the broken places. But those that will not break it kills.” —Ernest Hemingway

Bruce Bond’s profound and lyrical 23rd book, Scar, is made up of three sections of unrhymed sonnets. The sonnets aren’t named, only numbered, the cumulative effect of which is that the book feels as if it’s one sustained poem or meditation on suffering—how we endure it, and how we live through it. Therefore, it is perhaps more illuminating to talk about the book in terms of the movement and arc of its three sections, rather than focusing in on any individual poem.

Section I, entitled “The Lost Language,” charts the narrator’s relationship with music, and the ways that music becomes a language that mediates the pain of living:

“Every voice a little song. I am told,

when I first heard music, I heard no

numbers, then I did. I listened close

to count the footsteps in my fourths, fifths . . .”

Music weaves through nearly every sonnet in this section, creating tempo and contra-tempo, theme and counter-theme around notions of consolation or our attempts at consolation in the face of loss:

“When language was music alone,

I dreamt that I was two people, one known

the other beside a window in the rain.”

The opening section also charts the narrator’s life from infancy through the teen years, covering the ways in which in those years our bodies can become alien to us:

“It’s here I looked down at my body

and found it was not mine after all,

Throughout the haunting first section, Bond ties the acquisition of language (both musical and verbal) to the growing consciousness of the narrator and, ultimately, the link between consciousness and pain. ”Long ago I cried,” he says, speaking of his birth and then later, “My second shock/ was this. The stifled cry, my second word.”

Music, like poetry, is a language to which we turn to speak the ineffable, those things like love and death, suffering and pain, for which we find it difficult to express in more prosaic terms:

that music is a language. It is. It is not.

The more specific I am, the more music,

I lose. The more general I am, likewise.

Music is a language in the way the cries

of wolves are, and not, and cannot be

torn from their occasion.”

Here we see elegant complexity of Bond’s argument, and the paradox—“the more specific I am, the more music,/ I lose. The more general I am, likewise.” How then to find the language of our grief, our suffering, within such narrow parameters. That is the task Bond sets for himself, and that is the task he succeeds in admirably throughout the remaining two sections.

Section two, entitled “Scars,” explores the various scars or wounds we receive or inflict in life from the tearing of his mother’s perineum during his own birth to the narrator’s self-inflicted pain through cutting, “I cut. I question/ How deep is too deep,” to the wound caused by a father’s death:

“I lived in my father’s shadow once

back when I thought he could not die.

When he left, his shadow cut right through.”

Bond is careful not to indulge too deeply in his own pain, balancing it with the pain the narrator also inflicts on others. “I was cruel to a toad—I see him still—” To live, according to Bond, is to both give and receive pain. The knife that scars cuts both ways.

Further complicating matters, throughout section two, Bond questions or complicates the notion of what is real pain and what is imagined:

“I knew a girl who was sick so often,

her family told her it was in her head.

Turned out, it was. Blame it on the brain,

she said, as if it were a thing apart,

as waters are from the names of rivers.”

Bond reminds us that pain is pain, suffering is suffering. In the end, it doesn’t matter if our scars are real or imagined. They hurt just the same. Furthermore, those scars stretch out to those around us. They are even carried from generation to generation:

“But my father was sad, or sadness was

how I understood his silence.”

We leave section two with an understanding that scars are what bind us one to another—father to son, friend to friend, husband to wife.

The third and final section, “Narcissus in the Underworld,” begins with allusions to both Dante and Orpheus:

“Somewhere in the middle of my life

in the shadows of towers that wall the street,

I turned, and in the traffic and the talk

and clash of horns in contrary motion,

someone called, but what I saw was no one.”

Unlike Dante who loses himself in a forest somewhere half-way along his life’s journey, we are not even afforded a Virgil-like guide. Unlike Orpheus, we don’t even get the satisfaction of that final glimpse before we lose what we love.

The final section of the book is, in many ways, an exploration of our manifest attempts at searching for connection in the face of loss. From the narrator’s own need to re-discover the father he lost, “Wherever I walked, I saw my father’s face/ across the face of a stranger,” to the need for connection we all face each and every day: “Can you hear me, asks/ a voice somewhere, and, yes, I say. I can.” Bond builds upon the argument of section two here when he reminds us that we need those shared scars if we are to have any hope of connection with each other. In fact, as the book crescendos toward its many gorgeous, final images, Bond seems to be saying that our wounds, our scars, actually make up the language, the music, with which we communicate one to another

suicides turn to trees because they fall,

when they fall, in the heart of the forest.

I know you, I say to the branches, I

loved you once. And looked for you in vain.

Bruce Bond isn’t a newcomer to the poetry scene. He’s been around a while now, and with his 23rd book we are the beneficiaries of not only the hard-won wisdom of a life well-lived but the tonal and thematic variations of a musician poet attuned to the nuance of the pain we, each of us, carry within and the complexity of the scars we share with each other.