Scandal of the Year: Abandoned at the Altar 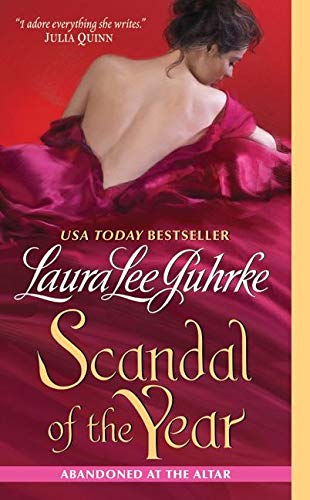 Laura Lee Guhrke’s first book in this duet, Wedding of the Season, suffers from an excess of setting. Luckily, the second, Scandal of the Year, is able to move past the surfeit of information and focus on the characters and relationship to create a more satisfying story.

Our hero is Aiden, Duke of Trathen, whom readers will remember is jilted by his fiancée in the last book. Trathen is all that is honorable, stable, and proper, so it is not only a huge scandal, but an unexpected shock when he is named as co-adulterer in the divorce case of the infamous Julia, Lady Yardley and her husband. His status saves him the worst of the ignoble speculation, but he finds that his entree into the highest echelons of society has been revoked, and his access to potential brides from that sphere severely limited. As Trathen is in the market for a wife, the situation is a cause for concern.

Our heroine is Julia, Lady Yardley, cousin of Aiden’s former fiancée and very much the wild spirit. Her marriage, entered into to please her parents, is a disaster, the scandal leading to divorce very much planned. Though she regrets hurting Aiden, she has no remorse for doing what she needed to do to escape. Now she is free, but without means, and beginning to find poverty as much a cage as her marriage ever was. She needs money, she needs it quickly, but what skills does a lady of leisure, a social butterfly, have to offer?

You see where this is going, right? He wants a wife, but doesn’t know how to run the social gauntlet? She only has skills of a social nature and a need for employment? It’s all downhill from there.

What works best in this novel are the characters. Julia is a free spirit, and in financial trouble, and though she uses Aiden regardless of the consequences, she is not shallow or selfish, or self-indulgent. Aiden is dealt a rather harsh blow, but doesn’t angst about it for 300 pages. Rather, the barriers between the two and their happy ending are grown-up and legitimate, which adds depth to their relationship as they work to find solutions.

The setting still plays a strong role, as with Wedding of the Season, but is tied to drama, and is therefore more interesting. Reading about a public divorce hearing, for example, is much more exciting than the decay of pastoral living.

For all that is positive, however, this novel (like the first in the series) doesn’t seem to lift off the pages, to delight and enchant as Guhrke has shown herself capable of in previous novels. It is a solid novel, and enjoyable for the novelty, but not of the caliber of her backlist. Readers might want to pick up Guilty Pleasures or And Then He Kissed Her instead.