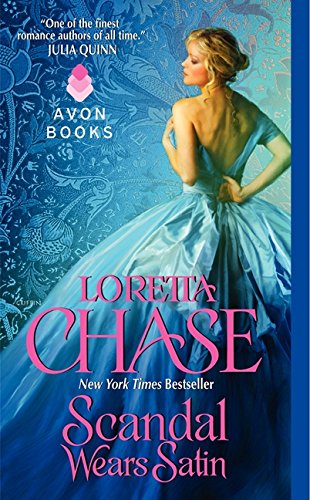 “Loretta Chase has created a character so clever, so devious, and so artful that she deceives herself right out of her own story. . . . even a bad Loretta Chase novel is still pretty good.”

Taken on its own merits, Scandal Wears Satin has all the hallmarks of a winning historical romance: a hoydenish heroine, a hero who can barely keep up with her, a long journey, a race against time, and, of course, the sparkle that seems to infuse every Loretta Chase novel.

Yet in comparison to its predecessor, Silk Is for Seduction, this novel fails to find its own feet, losing some of its charm to derivation.

But Marcelline’s recent society wedding has created a scandal even Sophie can’t seem to work to their advantage. By marrying a duke long associated with another young lady, Marcelline has angered a society matriarch—one with an excess of influence.

Maison Noirot may have been on the rise, but the tide has turned, and the Noirot sisters are facing the loss of all of their hopes, dreams, income, and independence.

Their hopes lie with one customer—and she’s about to make one big mistake. In order to save her—and, with no small amount of self-protection, their own business—Sophy packs up her wits, her ingenuity, and a few disguises and sets off on a rescue mission.

The only hitch in the plan is her companion: said girl’s protective brother and a thorn in Sophy’s side. The Earl of Longmore is worried about his sister, but he doesn’t see how a dressmaker—even one as beautiful as Sophy—can help save her.

Until he sees Sophy in action.

The more tales she weaves, the more people she deceives, the more he can’t help but want to see her, the real woman behind the schemes, the one he suspects is more alluring than any persona she can conjure.

Part of Sophy’s charm is also part of her failure as a character, namely the many roles she takes on, the many disguises she wears, and the many lies she tells. Much like readers speculate about the Earl of Longmore, they will be left wondering about the real Sophy; and with very little in the way of authentic characterization, it’s hard to connect to the her—or subsequently invest in her story.

Loretta Chase has created a character so clever, so devious, and so artful that she deceives herself right out of her own story. As the heroine of a suspense novel or even a series Sophy would shine. As a heroine in a romance novel, in which emotional truth and honesty are valued, Sophy struggles to convince.

Further, readers focused on historical accuracy will likely struggle with some of the liberties Chase takes in regard to the role of working women versus the role of noble women in 19th century London.

Yet it cannot be asserted that this novel fails. Much as with the adage about pizza, even a bad Loretta Chase novel is still pretty good.

The secondary characters in Scandal excel where the main character falls short, and Chase’s oft-visited family-centric themes add to the emotional depth.

Certainly, in a world currently obsessed with a naïve mal-a-droit, it’s refreshing to read about a strong, competent, savvy character and the man not intimidated by her prowess.

Still, when compared to some of her true successes, this Loretta Chase novel doesn’t rate.