The Scandal of the Century: And Other Writings 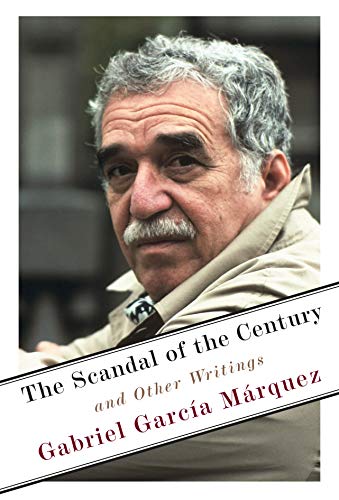 Colombian novelist Gabriel Garcia Marquez died in 2014 at age 87, a Nobel Prize winner, admired as one of the finest novelists of the 20th century. Credited as the innovator of “magic realism,” his international bestsellers 100 Years of Solitude, Autumn of the Patriarch,  Love in the Time of Cholera are regarded as modern classics.

But people forget that Gabo, as Marquez was affectionately known, was a successful international journalist, too, so there is a reason to celebrate the Knopf edition called The Scandal of the Century, a new collection of 50 of Marquez’s articles written over four decades.

Scandal is edited by Cristobal Pera, the English translation by Anne McLean. The collection includes his early years as a fearless cub reporter and hard-boiled political correspondent as well as feature stories, human interest parables (often with macabre stylings), and investigative reports. In the introduction to the collection, Pera quotes Marquez as saying that he wanted not “to be remembered for One Hundred Years of Solitude, or for the Nobel Prize, but for the newspaper.” Reporting was, he said, “In my blood . . . my books are works of a journalist, even if it’s not noticeable.”

He certainly knew first how to roll with the journalist punches. In his years as a young journalist studying at Universidad National in Bogota, his stories were being published in Espectador. Despite poverty, wars, and constant cultural strife, Marquez was becoming famous for his populous, earthy, witty, ironic, and often obtuse reporting style.

His career as a journalist was cut short in 1948 when the assassination of a politician ignited citywide violence, his student residence was burned down, and the university itself closed indefinitely.

The violence continued, eventually resulting in thousands of deaths. The young author fled to Cartagena de Indias and resumed his studies, also starting to write for another newspaper, El Universal, and soon was a full time writer, for El Heraldo in Barranquilla in 1950, where he was part of  the Barranquilla Group of writers, artists, and bohemians, and living in a flophouse/bordello, where Marquez was writing under to nom de plume Septimus and completing his first novel Leaf Storm.

Marquez became famous in Italy for his series titled “Scandal of the Century,” a 75-page expose in which Marquez dares to dissect a vast coverup of the circumstances of the death of a young woman Maria Montesi.

He presents fragments of evidence to get to the truth but is heavy-handed as he tries to dig through official malfeasance, media red herrings, and verifiable facts. Part of the story is that the truth (and the story) gets lost in the shuffle as the author tries to be ironic, accusatory, and clever all at once. Published in Italy in 1957 in installments, it ultimately ends up being more tabloidy than his editorial targets. The whole story gets clammy, involving some 32 people—from aristocrats to the woman’s family, and the mafia—all being implicated in the minutiae of the investigation. Was it a suicide, an accidental drowning, or murder? We never find out.

Later in the book, in his essay “Literature Without Pain” Marquez recommends that readers not to submit to reading as a “penance, and the healthy way is to “stop reading on the page where it becomes unbearable.” Along the trail of red herrings it’s hard not to heed that advice 10 pages in.

But despite the central disappointment of the title story in this collection, there are bountiful literary treasures by Marquez to make up for it. Chief among them, the events of the Cuban revolution, with frontline reporting of the Castro revolution, as well as hawk eye reporting of the fall of dictators all over South America in Argentina, Columbia, and Venezuela—always with the plight and voice of the people the narrative objective.

Another lengthier expose “The World’s Most Famous Year” is brilliant as Marquez wryly chronicles the events of 1957, from the deaths of Humphrey Bogart and Arturo Toscanini, the Algerian insurgency against French colonialism, to the fall of Juan Peron in Argentina and Batista in Cuba.

Meanwhile, in Rome, Sophia Loren’s marriage to Carlo Ponti was headline news, but the biggest media event Soviet premier Nikita Khrushchev’s first appearance on American television as Sputnik orbited the earth and struck fear in the military heart of President Eisenhower. If ever there was a source that tracked the atomic age of media hysteria and populist obsessions over celebrity and callousness over the human condition it was Marquez.

The heart of the book is comprised of articles about the revolutions in Cuba and other South American insurgencies. In “The Cubans Face the Blockage,” Marquez was part of the only press corps that was allowed into Havana when Batista was deposed, and he was initially, and controversially, sympathetic to Fidel Castro. Several stories cover Castro’s ascendency, showcasing Marquez’s incisive reporting and vividly conjured atmospherics.

Also gripping is the desperate mission described in “The Sandinista Heist: Chronicle of the Assault on the ‘Hog House’” about the insurrection that ended the corrupt Somoza regime in Nicaragua. There is a harrowing vision of a human catastrophic natural event and the cost in human suffering under a corrupt government is Marquez’s breathtaking account “June 6, 1958, Caracas Without Water.”

There are also stories of the macabre that startle, and indeed are questionable from a journalistic point of view, but have fascinating echoes of magic realism making one wonder why a news editor wouldn’t flag them.

Also, laced throughout these stories, Marquez writes with intimacy about his family and his most beloved home: Mexico City, as well as his wry and often hilarious encounters with many artists and writers everywhere his itinerant reporter’s soul would take him.