The Savior Generals: How Five Great Commanders Saved Wars That Were Lost—From Ancient Greece to Iraq 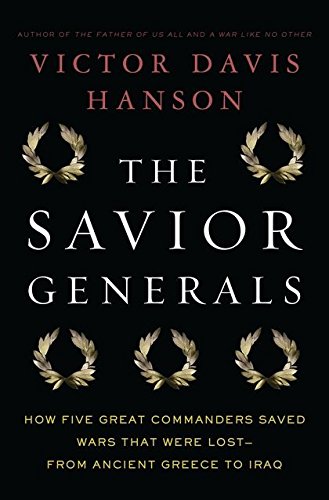 “Victor Davis Hanson has written another good book for a wide variety of audiences.”

Americans seemingly love underdogs, especially those who come into an apparently hopeless situation and turn defeat into victory.

While not completely discounting the public’s affinity for superheroes that appear larger than life and radiate success from beginning to end, the underdog’s place in history remains safe. Victor Davis Hanson uses the term “savior generals” to describe this type of character.

In his new book The Savior Generals: How Five Great Commanders Saved Wars That Were Lost—From Ancient Greece to Iraq Dr. Hanson profiles five such leaders.

He chose as subjects three Americans and two ancient generals. Most American readers are no doubt familiar with David H. Petraeus and William T. Sherman and many may have heard of Matthew B. Ridgway. Themistocles of Athens and Belisarius of the Byzantine Emperor are not household names, but nonetheless make for excellent additions to this group of firemen who saved the day for their state.

Dr. Hanson states that his sample of five is “admittedly somewhat arbitrary and varied,” and he goes on to contend that these five “inherited unprecedented failure that made their triumphs singularly spectacular.”

Despite the author’s caveat that the verdict remains to be seen in the case of Iraq, the inclusion of Petraeus in the sample seems forced, and perhaps intentionally so given the fame, or now infamy, surrounding that retired general. The Petraeus resignation was a breaking story as this book went to final press, so the only mention of that part of the story comes in a few short lines in the prologue.

Each of the five chapters contains one savior’s story from beginning to end. While this makes for somewhat lengthy chapters, they do not come across as too onerous to handle. There are enough section breaks within each chapter that leave the reader plenty of naturally logical stopping points.

Each of Dr. Hanson’s case studies follows a set pattern: He sets the stage for each of the saviors to appear, he introduces the savior’s background, and then he describes the acts related to saving the particular war in question. Within this basic plan, there are some slight differences from one general to the next, mainly resulting from the differences in situation in each case.

For Themistocles and Belisarius the differences include a little more time spent on the background of the conflicts, probably necessary for all but the most knowledgeable readers. The Sherman and Ridgway chapters get to the point a bit quicker, again for obvious reasons.

Interestingly though, the Petraeus chapter starts at the September 2007 return of “King David” to Washington to testify before Congress; only after a few pages on those two days does the narrative retreat to the 2003 invasion and then forward again to early 2007 when Petraeus took command in Iraq.

Dr. Hanson also presents some interesting analogies linking the five subjects. For example, he highlights the similarity in circumstance between Sherman and Petraeus as two savior generals whose “mass adulation . . . began to fade” in the years following their saving the day in the Civil War and the Iraq War respectively. In that passage, the characterization of Petraeus refers to his time leading Central Command and the war in Afghanistan. Dr. Hanson also links Petraeus to Belisarius, in that both men held a final job that was “close to but without ultimate power.”

Throughout the book, the author draws out other important secondary effects created by each general. Again Sherman is a good case in point, for pioneering the approach that has come to be known as “total war.” This occurred not because of any fiendish instincts on Sherman’s part, but because he better understand the material dimension of war, and the importance of seizing or destroying the resources that permitted the enemy to continue a war.

Many readers will also have some misunderstandings or misperceptions clarified after reading this book. For instance, Dr. Hanson clearly illuminates the relationship between Ridgway, the on the ground muddy boots leader, and MacArthur, the distant emperor type commanding the Korean War from Tokyo.

These two often disagreed on the direction of the war, and the day to day conduct of the fielded units. Ridgway only achieved true notoriety or prominence after he replaced MacArthur, following Truman’s relief of the most senior officer in the US Army.

At times, some sloppy errors in the text slightly detract from the credibility of the arguments, but none prove so egregious as to weaken to overall value of the book. For example, the cited dates for Ridgway’s arrival in Korea are at odds on two different pages of that chapter.

In another instance, Dr. Hanson refers to John Abizaid as the Coalition Forces Land Component Commander (CFLCC) during the invasion phase of Operation Iraqi Freedom, instead of David McKiernan. Again, only well versed readers might notice these minor errors, so they do not negate the overall effectiveness of the analysis.

On the whole, Victor Davis Hanson has written another good book for a wide variety of audiences. The general reader will learn more about five key figures in the history of warfare, from the ancient time to the present. The specialist may not discover as many new facts, but will likely come away with a different perspective on the links between generations or the characteristics that tend to bring about victory from once may have seemed a hopeless situation.