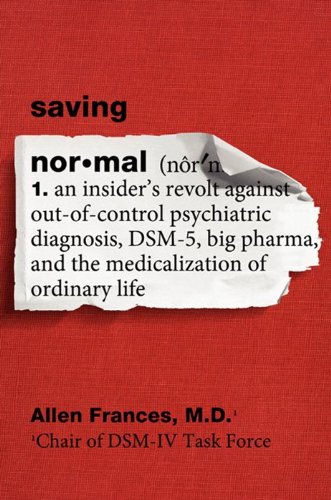 “. . . we must today fear that the medicalization of ordinary life has something to do with our having excessively medicalized mental disorders.”

The medicalization of ordinary life has been a slow process in the making and the sad result of a combination of factors. Diagnostic manuals like the DSM have contributed to this and so have the reimbursement procedures of health and social insurances. Careless science reporting, advertising excesses and the lowering of scientific standards in clinical and field trials are other contributing factors.

Having chaired the task force that prepared DSM-4, Allen Frances knows what he is talking about. Some of the criticisms he fares against DSM-5 also apply to his own work and he is sincere enough to admit these. But DSM-5 displays several new and more serious problems, besides accentuating those of the past.

Diagnostic inflation is number one on the list. This occurs “when we confuse the typical perturbations that are part of everyone’s life with true psychiatric disorder.” Trouble is, this “confusion” often takes place willfully in order to maximize profits: “The much fuzzier distinction between the mildly ill and the probably well is easily and frequently manipulated.”

The chapters that focus on the fads of the past, present and future are the strongest part of the book. Fads of the present include attention deficit disorder (ADD) and autism. Insofar as adults are concerned, depression is the big cash cow.

In actual fact, many of the diagnosed depressions would pass on their own given some time and attention. “Sadness should not be synonymous with sickness . . . Our capacity to feel emotional pain has great adaptive value equivalent in its purpose to physical pain—a signal that something has gone wrong. We can’t convert all emotional pain into mental disorder without radically changing who we are, dulling the palette of our experience.”

According to Dr. Frances, this is all wrong. Tantrums may be difficult for parents to bear and cope with, but they are part of child development; forgetfulness in older age occurs without necessarily leading to Alzheimer’s; and excessive eating is unhealthy but not a mental disorder.

Other problems with DSM-5 include the introduction of an “adult attention deficit disorder” category and a loose definition of “somatic symptom disorder” for tapping on psychosomatic medical problems.

Taming diagnostic inflation, thus “getting back to normal” will require a number of reforms in public policy (such as barring direct-to-consumer advertising) but also changes in the medical practices away from fast diagnoses based on few consultations towards “stepped diagnosis,” defined as follows: “Definite diagnosis should be made in the first session only in clear or urgent cases. For everyone else, the first several visits would be for fact finding, education and let nature take its course. Diagnosis would be made only after the dust has settled. This is the most direct and efficient way to stop diagnostic inflation in its tracks.”

Additionally, patients are advised to adopt a more self-critical approach: “The key to psychiatric diagnosis is self-report, and this is impossible without careful and persistent self-observation”—a useful piece of advice that does not always work in practice since it takes for granted that patients know what constitutes a symptom and how symptoms tend to cluster together. Yet most patients do not have this knowledge and do not wish to obtain it, especially not when in a situation of psychical stress.

It is in this connection that Saving Normal—otherwise a good guide through the intricacies of psychiatric diagnosis—falls short of expectations. What goes missing in the book is what is missing in psychiatric diagnosis more generally, namely a deep understanding of mental disorder as a state of psychical strain resulting from inner conflicts. Such inner conflicts tend to be debilitating, often affecting precisely those cognitive and emotional skills that make a patient a “smart consumer.”

The core problem of all diagnostic manuals is that they operate with manifest symptoms. These are counted together and assessed in terms of their intensity and duration. Such an approach is inherently prone to unreliability besides confounding different analytical levels.

More importantly, this approach completely ignores the hidden psychodynamics driving symptom formation. In the end, that we must today fear that the medicalization of ordinary life has something to do with our having excessively medicalized mental disorders.