Saving Freedom: Truman, the Cold War, and the Fight for Western Civilization 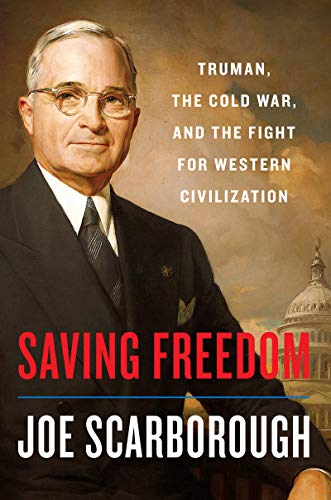 “Scarborough introduces the many sides of Harry S. Truman, a quiet man, yet a strong leader.”

What more can be said? What were his accomplishments that gave him good standing with these other giants? Well, if you have to ask that question, then you have to read Saving Freedom: Truman, the Cold War, and the Fight for Western Civilization by Joe Scarborough.

Scarborough’s focus in Saving Freedom is not the full biographical history of the 33rd President of the United States, but what he inherited upon Roosevelt’s death, and what he faced after World War II.

America was tired of war, tired of international intrigue; America wanted to savor the freedom of leaving Europe and Asia. Were it that easy! Within a short time after the war, Europe and the Middle East were being eyed by Stalin and the Soviet Union with a desire to extend communism across the world. Not something that America wanted to hear or see.

In particular, Stalin’s attention was on Turkey and Greece. Greece in particular had only one protector at that time—Great Britain. Unfortunately, Britain was experiencing its own financial problems as it rebuilt after the war and Greece had become a drain on its resources.

America, however, was strong, and it was not long before Britain approached America as the one resource best prepared to step in as Britain stepped out.

Scarborough’s opening chapter introduces the reader to the primary characters who will see America through the coming issues, and in Chapter 2, he depicts the horrors that faced the Greek government, which was itself in disarray as communism approached.

Scarborough focuses most of his attention on Greece and explains Turkey’s position as, “Though ‘spared the disasters that have beset Greece,’ Turkey needed support to maintain its ‘national integrity,’ which was ‘essential to the preservation of order in the Middle East.’” And so, the challenge was proposed: support both Greece and Turkey for, “To lose this struggle so soon after surviving the Second World War would be ‘an unspeakable tragedy,’ . . . not only for Greece and Turkey, but for other nations as well.”

Truman faced a difficult situation: that of convincing Congress to provide aid to Greece and Turkey. His plan, the “Truman Doctrine” began to take shape and would “bring one hundred and fifty years of American isolationism to an end.”

But before Scarborough gets into the details of the Truman Doctrine, he takes the reader on a brief journey to introduce the man himself; his rise to power from a haberdashery in Missouri, to vice president under FDR, and finally into the most important position in America—the President of the United States. Originally considered by many to be a “timid man . . . dubbed . . . the ‘Missouri Compromise,’ . . . his fellow Democrats and people around the world would learn soon enough that there was steel in the man from the Midwest.”

And that steel rose came in handy as plans to help Greece and Turkey began to take shape; to accomplish his goal and bring the doctrine to reality, Truman surrounded himself with the best of the best including Secretary of State, General George Marshall; Undersecretary of State, Dean Acheson; and Jack Hickerson, director of the Office of European Affairs.

The doctrine written, Truman made his case before Congress, and it was now up to them to approve or disapprove the plan. And now others became part of the team as the plan developed, in particular Senator Arthur Vandenberg, chairman of the Senate Foreign Relations Committee. Vandenberg approved of the plan and “embraced America’s new roles as the ‘arsenal of democracy’ and defender of freedom.”

Truman’s speech received favorable press, and “rather than declaring a desire to remain aloof from the rest of the world, Truman’s ‘Doctrine’ was a blueprint for global leadership.”

But the issue was not settled until both houses of Congress debated and voted, submitted amendments that were accepted or rejected, and made a final vote on the plan. In the end, “both the House and the Senate approved the conference report by voice vote.”

Of course, this was not the last step. Once approved, the policy had to be implemented. George McGhee, a career diplomat, was named as the Washington coordinator for aid to both countries. Edwin C. Wilson, ambassador to Turkey, coordinated the aid for Turkey; and Dwight Griswold, a previously Republican Governor of the state of Nebraska, was named as chief of the America mission to Greece. And nothing is without its problems. Griswold proved to be heavy-handed in his dealings with the Greek government and was eventually replaced.

While other issues rose and fell as the diplomatic mission for both countries took shape, the doctrine proved successful and Stalin eventually retreated from his goal to take over Greece and Turkey. He dropped his support of the communist guerillas, and the now well-trained Greek army easily defeated that group, bringing the civil war to a close.

It should be noted that while Scarborough’s focus is on saving Greece and Turkey from Stalin’s grip, there is another issue needing America’s help: that of recognizing the new state of Israel. Another withdrawal of British support occurred in 1948 when Great Britain left Palestine. Scarborough’s chapter Eleven Minutes provides detail about Truman’s support of Israel in the face of growing anti-Semitism. Facing arguments from both sides, Truman held true to his most famous adage, “The Buck Stops Here” and he did the right thing by giving America’s support to the new state.

Saving Freedom sheds new light on President Truman’s role and the initiatives he was involved in, including bombing Hiroshima and Nagasaki, establishing the Truman Doctrine, and supporting Israel, just to name a few.

Scarborough introduces the many sides of Harry S. Truman, a quiet man, yet a strong leader.

Judith Reveal is a staff reviewer for New York Journal of Books.