The Savagery of Bone 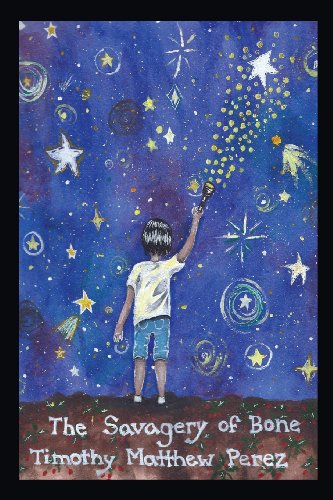 “. . . this writer constructs from his an entire mythological system. These are earthy, mysterious poems, sometimes awkward, often beautiful, like an ancient carving, rude and powerful, unearthed in an archeological dig, evidence of some lost civilization.”

The intimacy of lyric poetry frequently tempts readers to assume that the poem’s narrator must be identical to the author, particularly when the work in question occupies itself with issues of family.

On one level, Timothy Perez’s collection of poems The Savagery of Bone seems to present an autobiographical record of the author’s history with his father, a damaged Vietnam War vet, scarred from battles that trace even further back than the war, to his father’s own childhood.

Yet this work does not make it easy to unravel reality from mythology, however much we might desire an uncomplicated relationship between the voice of the narrator and the material he offers us.

The narrator’s father, a man massive as a redwood, stands at the center of this collection. In the poem “Strawberries, Cabbage, Celery and Rain,” the speaker and his brother try to get their arms around him, waylaying him as he returns from work in a sort of quasi-dance that reminds us a bit of Roethke’s poem “Papa’s Waltz,” as “Poppa [. . . begins] his waltz across the living room.”

Just as in Roethke’s poem, there is a violent edge to this man, who sleeps with a knife under his pillow, dreams of dismantling those who “wronged his childhood” (“Father’s Dreams”), and sometimes mistakes his own sons for Viet Cong, as in the poem “Under Fire,” where the narrator’s father grabs him, “the boa of his arm [constricting the boy’s] throat,” “the tender voice/of father whispering, ‘Friend or foe?’”

But while in Roethke’s poem, the threat presented by the paternal figure is almost palpable, the drunken play about to morph into violence, this dance remains gentle and loving, a comfort, for his father’s “strong/hand [cups his] lightly as a nestling” (“Strawberries, Cabbages, Celery and Rain”).

The narrator’s father seems as much totem as man in these poems, a mystery the author struggles to understand, encompass, and to some degree, to emulate.

For despite his latent violence, in the eyes of his son, this man “moves/the earth, makes green things grow: he gives me life” (“Strawberries, Cabbages, Celery and Rain”). He embodies the natural world, his body covered with a “jungle of scars” (“The Secrets of Monsters”).

A complex figure, he can even seem a blue-collar saint, driving in a car the narrator compares to “a dirty cathedral/on bald tires; its engine knocking in tongues all the way to mass “ (“Cathedral”).

But the father is not the only significant person here. These poems also return repeatedly to the mother who abandoned her children and husband, with his “nightmares/and wide-eyed stares” (“Going the Way of the Dodo”).

This absence haunts the narrator, who “wandered the streets looking for her face” (“There Should Have Been Flowers”).

Mothers do not come off well in this book, with a paternal grandmother who “mumbled her hatred” of her son every morning of his early life (“Shade Tree”) and a “prospector” mother who calculates her odds before leaving her sons and husband for a more comfortable life with  a used car dealer (“There Should Have Been Flowers”).

These female figures resemble “the sow giving birth in her pen chomping small,/steaming, squealing, squirming bodies in two, gulping down each of/her young as  they came spilling from her” (“Dirty Work”).

So when the narrator’s mother dances with him in the poem “Intuition,” it is a far less endearing act than his father’s waltz. While the children initiate the dance with their father, this one begins “like the start of a school/yard fight,” with his mother forcing him into place and constructing a kind  of “two-headed Frankenstein.”

The speaker’s father later affirms this fact of his origins, telling him “You weren’t born, you were made” (Thin Skin”).

In a further parallel to Roethke’s edgy dance, this dance marks the moment when his father realizes she will soon leave the family. There is thus little comfort in this memory for the narrator.

We all have histories, but this writer constructs from his an entire mythological system. These are earthy, mysterious poems, sometimes awkward, often beautiful, like an ancient carving, rude and powerful, unearthed in an archeological dig, evidence of some lost civilization.

One looks forward to the fresh wonders his next books will offer.