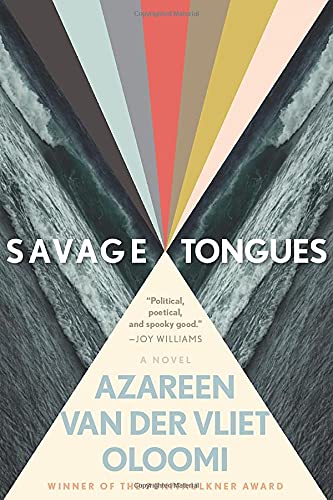 Trauma can have long-term and devastating effects on one’s mind, body, and spirit. In Azareen Van der Vliet Oloomi’s novel Savage Tongues, the author explores the aftermath of trauma. The protagonist, Arezu, an Iranian American, revisits the place where she endured suffering at the hands of an older man when she was a teenager and living in Spain. She is older now and trying to come to terms with a relationship that was both desirous and disastrous, where the lines between tenderness and violence collided and caused tremendous pain and confusion to the person the protagonist had once been. Can one move on and fully heal from a traumatic past? Can one forgive oneself and the person who hurt them? Can one return to a place and hope to find that the visit there will have made them stronger? All these questions are explored in this bold and excellently written novel.

Arezu’s love affair with Omar is difficult to read at times since the reader can feel the imbalance and violence of the relationship. It is the brilliance of the descriptions that make Oloomi a talented wordsmith: “I felt a fire light up in my belly. There was so much heat spreading through my limbs. The walls of my stomach were lit and burning. It was as if I had swallowed gasoline; the fire was roaring, choking me from the inside with its smoke and heat. I could barely stand the pain.” Although the novel sometimes moves at a sluggish pace with repetitive instances of a wild boar and expository passages, Oloomi brings the reader back with powerful scenes and a beautiful friendship.

However, the narrative slackens more often than it sustains the reader’s involvement throughout the duration of the book and, as a result, one cannot help but get lost in the backstory and lose the present moments of the novel like the scenes involving Arezu’s nurturing friendship with Ellie whose own story plays out dazzlingly and heartbreakingly in the novel. It is these moments between the two friends that carry the novel and although the backstory is important, the length of these expositions make you forget Arezu’s current state of mind and her intention of healing from her past.

The past can define you as much as the present. It guides you forward. Oloomi provides much psychological insight in her novel, and the reader begins to question what is it to feel love and desire and also hate and fear with a partner who is controlling, manipulative, and sometimes gentle. Even where most of the trauma took place, the apartment Arezu’s father gives her, is part of the pain Arezu experienced, and Oloomi describes this eloquently. The reader can’t help but feel the eeriness of the dwelling: “A wound passed from hand to hand. A scar no one knew what to do with. And yet here I was, trying to come to grips with life in this apartment that rejected it, that resisted even the electricity coursing through its walls. The lights have gone out. The lights have gone out, I kept saying to myself, astonished at how alive those walls were, how overpowering.” In order to move forward, sometimes we have to abandon things and people from our past.

Moving forward. This is one of the themes of the novel but, again, it is the intense focus on the backstory of Arezu’s tragic love affair with Omar that make it a hurdle to get through the book. Because the writing is so beautiful one can push forward, and this is what makes Oloomi an excellent writer. Despite drifting in some parts of the book, the reader finds their footing again with the commanding prose offered in the story.

What is even more powerful is Oloomi’s ability to shed a necessary light and understanding on the conflicts faced by Muslims. Early on in the book, Oloomi vividly paints a horrific beating Arezu’s brother endures at the hands of a skinhead weeks after Arezu, her mother, and brother arrive in the United States from Tehran. “His face had been shattered, his disfigured body left on the sidewalk, his hair matted with his own blood. I’d found him . . . he must have felt me standing over him, looking down at his swollen eyes, as blue as the darkening sky above us, in disbelief . . . I kneeled on the ground beneath the trees and drew his head into my lap.”

Furthermore, Oloomi handles the complexity of being an Iranian, an Arab, an Arab Jew, and an Israeli with compassion and tremendous wisdom. She tries to find an understanding of the abuse Arezu endured by someone who claimed to love her. “I wondered if Omar had felt more comfortable consigning me to my own extinction because he knew full well that we’d been subjected to a violence so severe and perseverant by the gears of history that the sheer magnitude of its force would conceal whatever brutality he might exercise against me. His compulsion to assault my body, however unforgivable, was minute compared to the disfigurement that had been engineered by the West against us both. . . .”

Although the novel lags in certain sections and the plot is not as strong as the characters, especially those of Arezu and her close friend Ellie, it is still a moving and beautiful book that in the end shows you can work your way through trauma with the support of good friends, friends who become family, a family chosen through shared pain, sadness, and a joy that can remind you that you are worthy of love and compassion no matter what you may have faced in your past.

Sonia Saikaley's most recent book is the novel The Allspice Bath (Inanna Publications, 2019), winner of the 2020 Independent Publishers Book Award Gold Medal and the 2020 International Book Awards for Multicultural Fiction. Previous works include two poetry collections and an award-winning novella.