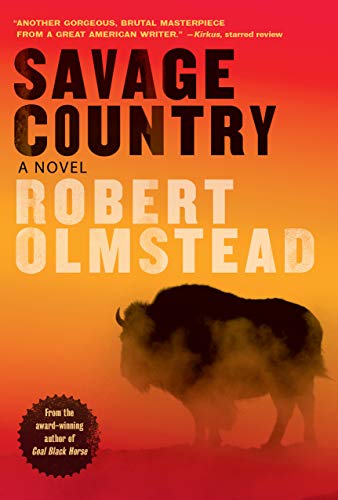 With the publication of Savage Country by Robert Olmstead, Algonquin Books adds to its reputation as a publisher of exceptional Western-themed historical novels.

When her husband’s death leaves Elizabeth Coughlin more than a widow; it leaves her a woman facing bankruptcy at the hands of Mr. Whitechurch, described by as a man who will “. . . eat his own guts for money.”

It is 1873, and the country, especially the West, is suffering through an economic depression. “Wages and income had already declined, but then the locusts came ruining farmers with even the smallest of debt.”

Elizabeth’s debt is not small. Meadowlark, the Coughlin farm is heavily mortgaged to Mr. Whitechurch. Her husband, David, had bought land, livestock, implements, recklessly borrowing to pay for them. “He’d spared her the truth. Could love survive such concealment come to light?”

Her brother-in-law, Michael, arrives in Kansas and pays off David’s debt to Whitechurch, but reveals his horde of twenty dollar gold pieces at the same time. Whitechurch sends his “hard boys,” teenaged boys in his pay and anxious to kill, to hunt down Michael.

Michael and Elizabeth meet for the first time the night before David’s funeral. Elizabeth believes that his eyes carry a sadness he cannot escape. Still “. . . she could not escape the idea she distrusted him.”

Conflicted with grief and anger toward her dead husband, Elizabeth is prickly, seeing sympathy for pity. “Who was she to judge? What truth could she lay claim to? Her husband was dead and she was poor.”

Mr. Olmstead’s description of the guests at David’s funeral eloquently reflects the diverse people who inhabit frontier Kansas and the West for that matter. In fact, in a single, simply written paragraph Mr. Olmstead’s sums up the hopes, the struggles, the defeats, the histories, of Western pioneers.

“The people gathered from town and the surrounding countryside to stand by the grave, the surviving farmers and stock raisers, merchants, homesteaders, businessmen, and their families. They lived on top of the land in houses and they lived beneath it in dugouts. “

Ex-soldiers dressed in the remains of Union uniforms, for David, unlike Michael, had been a Union officer, paying homage to a good and generous man.

Elizabeth, facing poverty with nowhere to go, and limited opportunity to support herself, is frightened and still angry. Yes, David was a good man, but he was also a foolish man. Some of her fate is her own fault. She accepted what David provided without questioning its source.

“Her dependence upon him had been complete, and because of that, she would now lose the vert ground in which he was interred.”

However angry and grieved Elizabeth is, she is also a proud and determined woman. She survived three years as a nurse during the Civil War; if she survived the horror of that experience, she can overcome the adversity facing her now. She will follow David’s vision to earn her way out of debt and survive, and all her workers who depend on her will survive.

She and her men will go south, beyond the Deadline that marks the boundary between Kansas and the land of the Comanches. She will hunt the buffalo, and the sale of their hides will allow her to pay her debts and to survive.

She asks Michael to lead the hunt. He is appalled. “. . . she was talking about staing for months south of the dead line and west of the Indian meridian and that was foolhardy.”

Elizabeth will hunt the buffalo with Michael’s help or not. Michael tells her he has paid off David’s debt to Whitechurch, so she need not carry out such a dangerous scheme. Elizabeth is less than pleased. “You are giving me what I own? By what right do you assume? Now I owe you when I would owe no man.”

All of Michael’s arguments against the buffalo hunt don’t deter Elizabeth, and he capitulates. Elizabeth is now his only family. “She’d have her excursion south. She’d get a taste of the bloody business. He hopes it will make her turn back.

In gritty, realistic detail Olmstead portrays the “bloody business” of a buffalo hunt. His meticulous narrative of the supplies needed, from the Sharps Big Fifty, to arsenic, to flour, sugar, coffee, ropes, and large wagons pulled by yokes of oxen, to the technique used to butcher the buffalo and preserve the hides, Savage Country is a textbook description of how the buffalo was hunted nearly to extinction but without the hand-wringing angst of many writers.

Savage Country is a story of survival, a story of what people are prepared to do to survive.  The West of 1873 is harsh and unforgiving, and a merciless natural environment. Olmstead describes the rattlesnakes, the blizzards, the hungry wolves and coyotes that follow the hunt to feast on the remains of the buffalo, Indians depredations, the danger of rabid animal bites, and the bloody, monotonous butchering.

From Michael and Elizabeth, to the Reverend Doctor Purefoy who insists on accompanying Elizabeth on the hunt, to a diverse group men, some loyal and good, others little better than thugs, the characters of three dimensional, complex, and capable of both violence and cruel mercy.

Savage Country by Robert Olmstead is a literary achievement that describes the West and those who struggled to survive in its harsh environment. It is not for fans seeking a romantic view of the West, nor for those wanting a tradition shoot-um-up. Savage Country is for the serious reader.