On Saudi Arabia: Its People, Past, Religion, Fault Lines—and Future 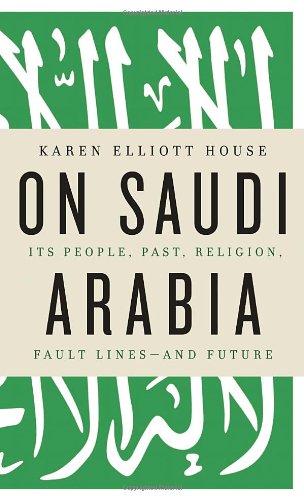 “. . . Saudi Arabia is the interplay of multiple issues—religion, royalty, economics, culture, tradition, and modernity—in a society still largely shrouded in its robes and abayas . . .”

Karen Elliott House’s work On Saudi Arabia: Its People, Past, Religion, Fault Lines—and Future is a profoundly important work for a variety of reasons.

First, it is a well-written expose plumbing the depths of the current social milieu of that country.

Second, it provides an unblemished and objective assessment of the Saudi worldview with particular reference to the relationship between the royal family and the other 99 percent in Saudi.

Finally, and with particular relevance to the “Arab Spring,” it provides creative insights into how best to engage the Saudis in a productive dialogue, especially as the world attempts to defuse the present Syrian crisis, relationships with Iran, the Arab Spring, and the energy conundrum faced at the end of the fossil fuel age.

Ms. House is well suited to review and discuss the Saudi enigma. For the past 30 years she has been a reporter, diplomatic correspondent, foreign editor, and publisher at the Wall Street Journal. This experience and expertise has kindled in her an enthusiasm and the intuition to discover more about Saudi society than most other journalists. She likens her ability to understand Saudi Arabia for the following reasons:

“I understand from personal experience the impact of rigid religion, authoritarian parents, and isolation from the wider world. I grew up in the hot, barren plains of the Texas panhandle, so similar to Saudi terrain, in a small town where, as in Saudi Arabia, religion defined daily life and where the only available social events were attending one of the town’s four churches several times a week.”

She goes on to say that: “It was a way of life that held little resemblance to that of most Americans, but was remarkably similar to what I found in Saudi Arabia.”

The keys to Ms. House’s astute analysis lies in her evaluation of the interplay between different Saudi generations and the alienation felt by youth in that society, the interaction between different visions of religiosity, and the widespread domestic and international perception of corruption, and by implication, royal entitlement in Saudi Arabia.

The Saudi intergenerational conflict is creating an escalating crisis. As Ms. House notes because: “Saudi youth whether liberal, traditional, or fundamentalist share at least three characteristics: most are alienated, undereducated, and unemployed.”

For her this is compounded by the fact that they have “experienced a kingdom of poor schools, overcrowded universities, and declining job opportunities. Moreover, their royal rulers’ profligate and often non-Islamic lifestyles are increasingly transparent to Saudis and stand in sharp contrast both to Al Saud religious pretensions and to their own declining living standards.”

On Saudi Arabia also discusses the disconnect between religious ritual and religion as it is practiced in daily life. House observes:

“The young are at a crossroads. They see life in the West, and also the Saudi Arabia of tradition. They need guidance to know how to choose the best of the West, but they don’t get that guidance. Instead, what they see here is a gap between religion and life. If religion is preached rigidly and practiced another way, it confuses the young.”

“A number of young Saudi adults are trying to bridge the gulf between religion as preached in the mosque and life as seen on the Internet. It is another of Saudi Arabia’s many paradoxes that in a country where religion and state are one, far too often religion and life are separate.”

Ms. House focuses also on corruption within Saudi society with particular relevance to the example set by the extensive royal family. Here she relates a discussion she had with a professor who regarding religious practice who stated:

“The country has turned its focus from religion to money. We have become consumers, and everything is for sale. You can buy and sell a fatwa. Sheikhs go on television to advise the people, but all they care about is their television contract. Our social relations are chosen on the basis of whether or not we get a benefit.”

Further corroboration to the impact of the royal family’s role in the perceived growth of corruption in Saudi society, and the fact that Saudis’ patience with unaccountable government is evaporating is Ms. House’s presentation of the remarks by a Saudi Prince who observes:

“Eighty percent of the corruption is simply because government doesn’t work, so people pay bribes to get services. Government grew too fast, and we didn’t have proper management, but we will change that.”

On Saudi Arabia presents a clearer picture of the reality of Saudi Arabia to the outside world. By objectively portraying this society in a critical, objective, unblemished, and caring manner, Karen House encourages the Saudis to push beyond the status quo and pursue a greater meaning for its society and the rest of the 21st century world.

She describes this as follows:

“So the Royal Saudi 747, richly appointed but mechanically flawed, flies on, its cockpit crowded with geriatric Al Saud pilots. Buffeted by mounting gales, the plane is losing altitude and gradually running out of fuel. On board, first class is crowded with princely passengers, while crammed behind in economy sit frustrated Saudi citizens. Among them are Islamic fundamentalists who wan to turn the plane around, and also Islamic terrorists who aim to kill the pilots and hijack the plane to a destination unknown. Somewhere on board there may also be a competent new flight team that could land the plane safely, but the prospect of a capable pilot getting a chance at the controls seems slim.”