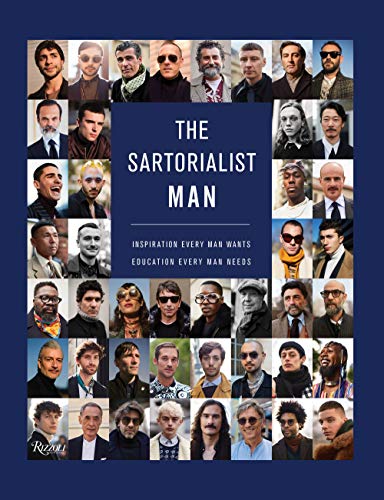 Scott Schuman is credited with being a street photographer among many other monikers, but he is so much more, especially with this incarnation of The Sartorialist. One might consider him to be a lexicographer as well. He provides the reader with his usual visual diary or chronical of images, but he also brings to light the language and the vernacular of men’s fashion, whether it is about a pant pocket style or the folding of a pocket square or length of one’s pants. The terminology and vocabulary is extensive.

So The Sartorialist: MAN: Inspiration Every Man Wants, Education Every Man Needs might be considered on a visual level as well as on a style level and quite possibly as a text book or dictionary of sorts; please note fashion is not mentioned here and the book most definitely not a how-to manual.

For those who follow men’s fashion Schuman might be considered in a league of his own, even if he is compared to Bill Cunningham or Tommy Ton because Schuman offers not only insight, but knowledge about the clothes that he photographs and the people who wear them, as opposed to the latter two who were strictly  all about the image. He speaks to the esoterica, the common sense, and the unexpected or unrealized aspects of style . . . not fashion but personal style.

“To be truly elegant one should not be noticed.” —Beau Brummel

This reader, who happens to have more than just a passing knowledge and firsthand experience in men’s fashion, found this monograph to be much more of a tutorial rather than a guide or textbook about men’s style, and it cannot be emphasized enough that the book is really about style and not fashion per se. Schuman brings to light so many aspects of menswear that most men don’t even consider or even realize are part of their look or for that matter even exist, yet they can be adjusted or massaged according to one’s own preferences.

“This book is about enjoying the freedom of exploring what looks great on you— and that, perhaps, is the ultimate in chic.”

Some of the most pertinent points that Schuman discusses and “illustrates” concern fit, patterns, button stance, lapels, and accessories. For this reader the point of fit is one of the most intelligent and insightful. In so many words he states that you can take a relatively inexpensive article of clothing and turn it into something that resembles bespoke by having it fitted exactly to your specifications with the knowledge and skills of the proper “alterist.” (His term.)

This edition of The Sartorialist covers every article of clothing from shoes up, and also brings into play every possible accessory including your choice of eyewear to how to pack your luggage, and your choice of socks; he is nothing if not extraordinarily thorough in his dissection of men’s style.

Lastly, Schuman defies popular misconceptions about fashion/style by photographing men of all ages and not just from New York, Italy, and France. Personal style exists around the world at every age, nationality, and ethnicity.