Queen of Bebop: The Musical Lives of Sarah Vaughan 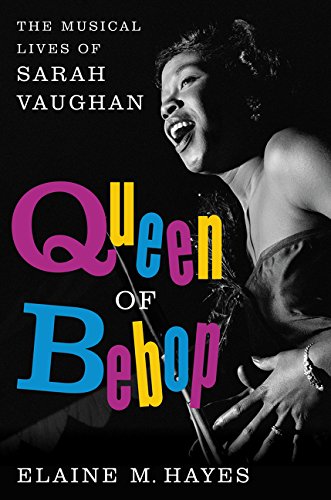 “Elaine Hayes’ vivid portrait of Sarah Vaughan’s life, times, and indelible musical legacy reveals why she was indeed called The Divine One.”

In the late 1940s jazz giants Charlie Parker, Dizzy Gillespie, Thelonious Monk, and Lester Young created bebop, a musical revolution that launched a new era. But there was also a singer who was very much a part of that scene: Sarah Vaughan, who was known then as Sassy and The Divine One. She is finally given her full due as a musician and jazz vanguard in Elaine Hayes’ Queen of Bebop.

Hayes was a studying classical piano when she first heard Vaughan’s recordings. She was not only moved by the beauty of her voice, but recognized and became fascinated with the depth of Vaughan’s technical artistry.

Vaughan grew up in a working class family in Newark, New Jersey, where she sang and played piano for her church choir. She also dreamed of having a career in classical music as an opera singer, in the footsteps of Marion Anderson. Anderson was the first African American opera singer to perform at the Metropolitan Opera and made history by singing on the National Mall in Washington. Unlike Anderson though, Vaughan did not have the avenues to pursue private classical training, so she pursued a viable alternative, exploring jazz clubs in Newark and New York City.

In 1942, the shy 18-year-old Vaughan sang “Body and Soul” on the Harlem’s Apollo Theater stage on amateur night contest and beat the competition first time out. Vaughan was soon appearing in newly formed bands by headliners Earl Hines and Billy Eckstine. But soon she started to venture out on her own and began to sit in with the musicians in Harlem where virtuoso players were experimenting and creating new music. From the start Vaughan was in a class by herself, not putting up with the second-class performance role of the “girl singer,” onstage or off. Eckstine is quoted as saying that many musicians treated her with disrespect, professionally and personally.

Vaughan’s early records advancing her visibility and just in her early 20s, she started to be a headliner on tour. By the 50s the bands had to perform in the south as part of the regular tour circuit. Vaughan was subjected to Jim Crow laws and to humiliating, ugly, and dangerous circumstances for her and the band. She faced racism and misogyny even after she landed a contract with Columbia Records; they wanted to mold her into a pop star, and she was contractually forced to record under the dictates of bandleader Mitch Miller who had her sing formula hits and novelty tunes.

Hayes captures the intoxicating backstage history of this pivotal era in jazz and its impact on American culture. Never far from the narrative is also the history of the racial divides that worked against black musicians on tour and that dominated the recording industry.

Like Ella Fitzgerald and Nat King Cole, Vaughan integrated the radio; she did have a string of mainstream hits including “Misty,” “Whatever Lola Wants,” “Key Largo,” and even songs she hated like “Make Yourself Comfortable,“ but she consistently resisted being forced by the record companies to record material she considered beneath her. When she was contractually committed, she got through the sessions as a professional, often going through the motions, but even a lackluster performance spawned hits that would haunt her later in her career.

Vaughan had a four-octave range at her command. She was defining the vocal musicality of jazz improvisation and was an innovator along with Billie Holiday, Ella Fitzgerald, Nina Simone, Peggy Lee, and Carmen McCrae. Hayes details how female stars were still subjected to the male dominated industry that constantly wanted to package the singers without regard to their artistry or integrity. At so many points in her career, Vaughan resisted, and when she had to she walked away, often risking her career opportunities.

Vaughan stayed on tour honing her repertoire and collaborating with her choice of A-list musicians. She took losses, breaking record contracts rather than being forced to perform material she didn’t like. She toured nonstop and self-produced records so she could retain artistic control of her career.

Meanwhile, Vaughan’s personal life was equally tumultuous, and her husbands became her managers, often sabotaging her career and hurting her deeply. Hayes is as frank about her personal life, without being exploitive. Vaughan’s three marriages all had promising starts but ended with many disappointments, and Hayes gives a thoughtful detailed account of each one. Vaughan was trusting and devoted in all of her relationships, and when they didn’t work out, she didn’t have time to be bitter about it, she was too busy making musical magic.

In the end, it was all about the music and, for Vaughan, working with the best in the business. Vaughan toured virtually nonstop during her 47-year career and continued to expand her musical repertoire. Elaine Hayes’ vivid portrait of Sarah Vaughan’s life, times, and indelible musical legacy reveals why she was indeed called The Divine One.