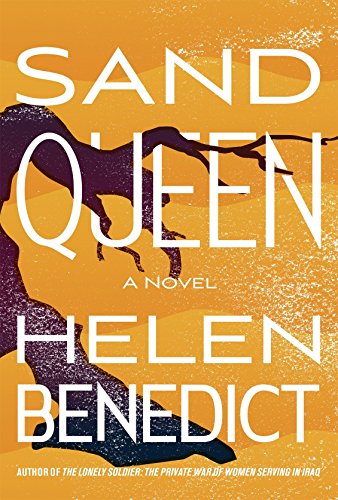 “. . . it is clearly Ms. Benedict’s intention to turn stereotypes upside down, make readers squirm, and yet still keep them reading. Ms. Benedict pulls off this audacious gambit because she is an exceptional writer and storyteller. Her gritty depiction of a soldier’s life in the Iraq desert is particularly well done. Sand Queen is so powerful precisely because Helen Benedict is so pissed off.”

Anyone over age 40 remembers old war movies all with the same basic formula: an underdog band of American soldiers overcomes incredible odds to defeat an evil foreign enemy.

The Vietnam experience unhinged war narratives from this template. Stories about U.S. soldiers and their wars grew darker. M*A*S*H, Catch 22, Apocalypse Now, Full Metal Jacket, and Platoon showed us a dimwitted, bureaucratic U.S. military in which some American soldiers did terrible things, and others needed to oppose them. The antagonist in these stories was often the U.S. military itself, rather than the people shooting at American soldiers.

More recently, the novels of Tom Clancy and James Webb, and movies like Saving Private Ryan, Letters from Iwo Jima, and Blackhawk Down, have veered U.S. military narratives down a new path. The missions and plot lines of these recent narratives maintain the ethical complexity of the post-Vietnam tales, but the goodness of U.S. soldiers is re-established.

Helen Benedict writes Sand Queen against this new narrative and in revulsion to the Iraq War.

Author Benedict constructs Sand Queen around two main characters: Kate and Naema. These two women are strikingly similar a few important ways: They are the same age and in love with faraway men. Both women are also facing existential challenges. Kate is being subjected to persistent and grotesque misogynist behavior at the Iraqi prisoner camp that she guards with her platoon, while Naema is caring for a frail mother and grandmother as her father and brother are prisoners in the camp Kate guards.

Despite these similarities, Ms. Benedict has carefully crafted Kate and Naema as mirror images: one is tall, one is short; one is well educated, one is not; one has strict religious views that limit her ability to handle problems, one is secular and rational. In short, one woman is managing tough circumstances exceedingly well, while the other is overwhelmed and heading for a breakdown.

In a unique twist of stereotypes, Naema is emancipated and in control, and Kate is pulled down by Christian fundamentalism and abusive sexism. Many readers will find this disquieting—but it is clearly Ms. Benedict’s intention to turn stereotypes upside down, make readers squirm, and yet still keep them reading.

Ms. Benedict pulls off this audacious gambit because she is an exceptional writer and storyteller. Her gritty depiction of a soldier’s life in the Iraq desert is particularly well done. For example, she describes a soldier’s food, called Meals Ready to Eat (MRE), this way: “MREs come in these brown, plastic sacks, and inside there’s a main course of cardboard disguised to look like greasy meat, along with a bunch of artery-clogging junk food and a chemical pouch for heating the mess up without fire, which probably tastes better than the stuff it’s supposed to cook. The MREs are famous for clogging up your guts like plaster—we call them Meals Refusing to Exit.”

Ms. Benedict’s writing is not for the faint of heart—she uses lots of dirty words and finds a dozen ways to bring sexual organs and feces into her narrative. But these appear to be real parts of Kate’s life while stranded in a sweltering desert camp full of depraved American and Iraqi men. The blue material deepens the authenticity of a book and never seems gratuitous.

Readers with a serious beef against the military or George W. Bush will call out sincere “amen” all through Sand Queen. Apolitical or politically moderate readers may find it a bit pedantic: Someone with Ms. Benedict’s talents could have written a convincing antiwar story without being so coarse.

But the world is well served by aggrieved artists, even when we don’t like all aspects of the resulting art. In this case, Sand Queen is so powerful precisely because Helen Benedict is so pissed off.