Sand and Steel: The D-Day Invasions and the Liberation of France 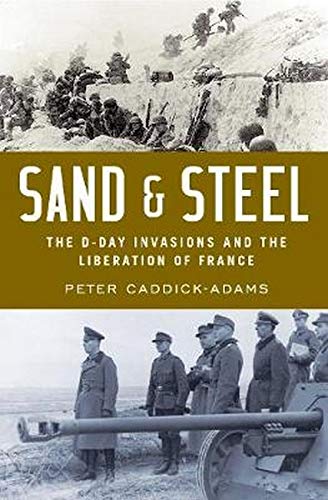 There have been a veritable library of popular histories written on D-Day, beginning with Cornelius Ryan’s 1959 classic The Longest Day, but this really extraordinary volume stands to become the new benchmark narrative, conveying both the scale and individual experiences of that momentous operation in a sharp and highly readable book impressively weighing-in at over 900 pages.

Caddick-Adams brings not only a historian’s skill of research and narrative, he also incorporates his experiences as a military officer and battlefield explorer to add vignettes on the veterans he’s personally met and interviewed, and a sort of battlefield archeology of the surviving monuments, bunkers, and other landmarks that still exist.

Unlike many other popular histories of D-Day, this book devotes almost half the pages to the extensive preparations and pre-invasion operations conducted by the Allies prior to June 6. The story of D-Day actually began over a year prior when the first Allied planning group called Chief-of-Staff, Supreme Allied Commander (COSSAC) began examining potential landing locations on the French coast, quickly settling on the Normandy coast as the best possible target. Of course, at that time, there was no actual Supreme Allied Commander, and the preliminary plans were severely constrained by the number of landing craft and ships assumed to be available to support a landing.

Even as this preliminary planning began in earnest, many British officials were skeptical about any successful landing on the French coast, including Winston Churchill himself. The Allied disagreements on strategy are intriguing to observe as they unfold, and the author brings these sometimes acrimonious debates to the fore, showing that as late as fall 1943, there was still not a completely unified Anglo-American desire to attempt the Normandy landings.

However, as the overwhelming American desire to attack straight into Germany through France carried the day, planning accelerated as General Dwight Eisenhower assumed the duties of Supreme Allied Commander in early 1944. The invasion was expanded and reinforced with a massive planned airdrop, the biggest of the war so far, and a highly controversial plan in its own right, with over 50–75% casualties expected for the paratroopers.

However, once the strategic decision was made, the unfolding of a multi-layered Allied campaign to gain air supremacy by annihilating the Luftwaffe, render the U-boat threat impotent, and conduct a pre-invasion bombing campaign to isolate the Normandy battlefield by degrading the French road and rail system is described to show how a truly integrated campaign was needed to ensure the best possible success for the landing attempt.

The author covers a wide variety of topics often left out of other D-Day narratives, especially the logistical and training needs of the dozens of divisions destined for service in France. The units selected for the actual invasion were truly the best trained and equipped assault force in history, with some of the units spending almost two years prior to the invasion training in England, which the author covers in great detail, including the notorious Slapton Sands incident, covered up for decades after the war.

The minutiae of war, some of which is eagerly detailed in lists of materiel that would stagger modern readers, showed both the industrial might and logistical appetite of the fully mechanized Allied armies of 1944. The book also takes a tour around England with the troops, showing their interactions with the English people, including both the seamy and absurd side of an island nation overrun by over a million American soldiers, sailors, and airmen.

Once the invasion kicks off, the battle narrative brings out both well-trod and lesser known actions of both the airborne and beach landing fighting. Tackling the actions from west to east, the battlefield accounts are compelling. Beginning with the American airborne drops and Utah Beach, the author not only marvelously interweaves personal narratives and other primary and secondary sources, he offers some fascinating historical analysis and critique of D-Day’s historiography. This includes questioning many of the long-held myths of D-Day, many of them generated by The Longest Day and the U.S. Army’s official history Cross-Channel Attack. This critique is long overdue and actually adds value to the overall narrative as these myths are either corrected or validated.

This is particularly true of the Allied deception and counter-espionage efforts, long credited with keeping the German 15th Army pinned in the Pas de Calais region for critical days after the Normandy landing as Hitler and his generals expected a second Allied landing. As the author shows, although the efforts of Operation Bodyguard and other Allied intelligence and deception operations deserve a great deal of credit, the fact is that the German’s own bureaucratic and command mismanagement actually inhibited them from collecting or analyzing intelligence misdirection from many of the Allied deception efforts.

There will no doubt be many new books to commemorate the 75th Anniversary of D-Day.  If you can only read one, make it this book. Although it is a real doorstop, it will be well worth your time, even if you’ve read previous one-volume narratives.