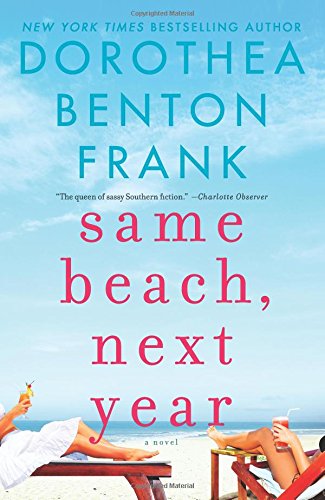 Eliza and Adam Stanley are parents to two precocious twin sons, Max and Luke. They rent a condo on the Isle of Palms, a barrier island near Charleston where they unexpectedly meet Carl and Eve Landers and their daughter Daphne. They hit it off until Eliza learns Adam and Eve were intimately close in high school. Adam still appears to be besotted by this beautiful woman; he never disclosed his relationship with to Eliza. Was this meeting truly unexpected?

Eliza feels threatened and is determined not to like Eve. Carl experiences jealousy, though he and Eliza try to brush off negative thoughts. He flirts shamelessly with Eliza, while he and Adam find themselves in competition on the golf course.

The couples buy condos at Wild Dunes and vacation together every year, cementing their friendship. Also, Adam's dad, Ted comes with Clarabeth, a woman he later marries, and Eve's eccentric mother Cookie decides to join the group, making for a humorous and trying time for all. Cookie, brazen in speech, dress, and attitude makes a play for Ted, which amuses the younger folks.

Young Max, being supervised by Clarabeth and Ted at the playground falls, breaks his arm and needs medical attention. They rush him to the hospital where Carl, a pediatric surgeon, makes sure he receives the best care possible, further bonding the families.

Years pass and Eliza and Carl still sense an attraction between Eve and Adam but think nothing of it until one day Adam goes to the island to perform repairs on their property. At the spur of the moment, Eliza plans to surprise him only to find him asleep on Eve's couch with her curled next to him wearing only a skimpy robe.
Fury sets in, and Eliza thinks of all she has given up for Adam and the boys. She heads to Greece, her mother's birthplace, and where she's always wanted to go. Eliza's pain and Adam's ignorance of his actions are shown in the following when she is summoned home after Clarabeth's death:

"I'm glad you're back," Adam said.
"Only until Monday, then I'm going back to Greece."
"I know, but how long will you be away?"
"A week, maybe two. I'm not sure."
"Eliza! You can't just leave me like this and expect everything to be the same when you get home, you know."
"Adam? That's the point, isn't it? I don't want everything to be the same when I return. Got it? You've got a whole lot of soul-searching to be before there's a chance to make things right between us again."
"I've already done that. I want things right between us."
"How do you know?"
"Because I saw Eve. And I know now that I'm just not interested in her like that."
"Really? Where'd you see her?"

Once again Dorothea Benton Frank invites us to the Lowcountry of South Carolina where she captivates her readers with a moving tale of love, family, and heartbreak, only to confirm there can be a happily-ever-after no matter the circumstances.