Salamati: Hamed's Persian Kitchen: Recipes and Stories from Iran to the Other Side of the World 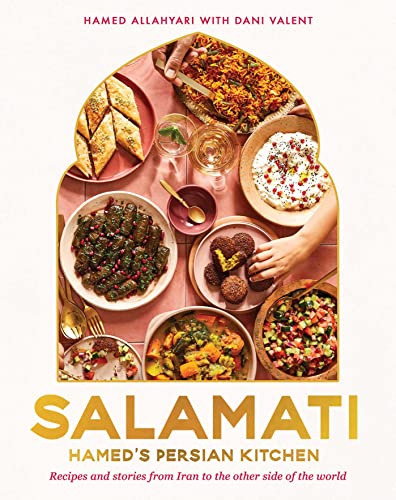 “for the adventuresome home chef, Allahyari offers a world of flavors.”

In mortal danger for his beliefs, Hamed Allahyari and his pregnant girlfriend fled their homeland of Iran, first spending two months in Indonesia and then, after grueling hours long by truck over badly paved back roads and then days crammed aboard a boat another five months on Christmas Island before being granted asylum by the Australian government. Once there, life remained extremely difficult for the young couple who were now parents of two young children, and though Allahyari had been a chef and restauranteur in Iran, no one was interested—or so it seemed—in Persian cuisine.

Unable to find work Allahyari began volunteering at the Resource Center, an organization that provides support, legal advice, and other assistance including meals to refugees and people seeking asylum.

“Every day they feed 250 people a free lunch,” Allahyari writes in the introduction to his cookbook Salamati: Hamed's Persian Kitchen: Recipes and Stories from Iran to the Other Side of the World. “I started cooking there two days a week, making Persian food for people from all over the world: Sri Lanka, Afghanistan, Miramar, Sierra Leone, all kinds of places, and most of them had never tried Persian food before. But when they tried it, they liked it. They talked to me about it, asked me about it, and it made me happy.”

At the recommendation of others, Allahyari also began teaching cooking classes, demonstrating how to make such dishes as Zeytoon Parvadrah (Olive and Walnuts Chunky Dip), Abdoogh Khiar, Yogurt and Cucumber soup, Sabzi Pofow Ba Mahi (Fish with Herb Pilaf), and Persian Love Cake. Over the years, Allahyari taught more than 2500 people how to make Persian food. Now, he caters and is chef/owner of SalamiTea, a restaurant located in Sunshine, an ethnically diverse neighborhood in Melbourne. The name is a play on “salamati,” the Persian word meaning both “health” and “cheers.”

Salamati is more than just a cookbook, it’s also a memoir and homage to the country he had to flee. The introduction to the featured recipes in his book might offer a personal connection to the dish, a description of a unique ingredient that helps define it and bring out its best flavors—though he also offers a substitute for such items as Persian dried limes, which might be difficult to locate outside of a major city, and/or puts the food in context with the scenes to Iran.

“This dish is traditionally served in Iranian shisha shops, the cafes where older men gather to smoke water pipes, drink tea and solve the problems of the world,” he writes about Ghahve Khunee Omelette (Street-Food Tomato Omelette). “Shisha shops don't really serve food but inevitably people get hungry while they're hanging around, so it's become traditional for staff to whip up a quick tomato omelette for customers and serve it with bread, raw red onion, herbs and lemon. If you want one, all you ask for is 'omelette.’ There's no menu as such.”

Not all the recipes are easy but for those who don’t want to spend a lot of time in the kitchen, there are enough simple ones to get started. Full-color photos of each recipe show what the finished product will look like. And for the adventuresome home chef, Allahyari offers a world of flavors.