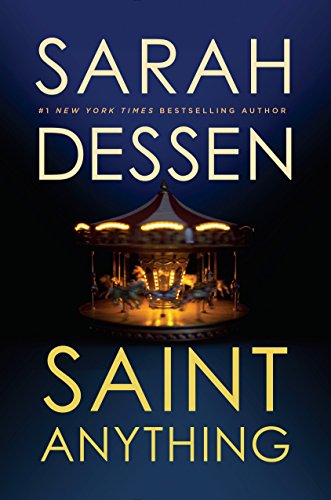 “We all need protecting, even if we don’t always know what from.”

Sarah Dessen takes on the YA Big Four in Saint Anything: food, school, relationships, and families. The pacing is measured in this 400-page novel, which covers a relatively short time span.

It takes a while for our narrator Sydney to come alive on the page. Her voice is formal and emotionally flat as she recounts the events that sent her older brother, the bright star in her family’s constellation, to jail.

As readers get to know Sydney, the reason for the somewhat stilted narration becomes apparent. (In conversation Sydney sounds much more age appropriate, which can be disconcerting.) Sydney has felt invisible in life, having always lived in her brother Peyton’s shadow. She is the good girl: does her homework, keeps her room neat, spends many hours alone in her family’s large, luxurious house in the wealthy section of town. Dessen never identifies the town, nor the geographical region, which makes Saint Anything seem somewhat ungrounded.

Sydney has been attending a prestigious private school, where she generally keeps to herself, although she has a few close friends, all, “very different” from their classmates.

Perhaps now, Sydney muses, with her brother out of the house, it will be her turn to be noticed.

Not so. Sydney’s obsessive and overly controlling mother Julie now devotes even more time and attention to Peyton, who, while driving under the influence, left a young man paralyzed. Julie busily plans family outings to prison, and takes little notice of her struggling daughter.

Selfless Sydney, never wanting to be a burden decides to transfer to the local public school, where there is no tuition and, more importantly, no one who knows about her brother’s transgression. Here, thinks Sydney, she can be both invisible and anonymous.

Wrong again. She meets Layla Chatham, breezy, friendly girl who’s passionate about French fries and is a connoisseur of YumYums and Pop-Tarts. Layla ushers Sydney into the warm, protective embrace of her family, which includes her handsome older brother Mac, a health-food junkie, who snacks on “Kwackers” studded with “Kwist seeds,” slathered with hummus; an older sister with a police record; a mother with MS; and a their benevolent patriarch.

Sydney finds herself falling for the Chathams, especially Mac. What girl hasn’t developed a crush on her best friend’s brother? Dessen handles the nascent relationship with delicacy, compassion, and authenticity. Mac, once morbidly obese but now handsome and trim, wears around his neck a medallion of his patron saint. Sydney wonders idly if she needs a patron saint, someone who will protect her from anything. She notes, “We all need protecting, even if we don’t always know what from.”

Dessen stacks the deck a bit when showing the difference between Sydney and Layla’s families. The Chathams live in a modest house that they share with a pack of cranky rescue dogs. Mac keeps their late model cars and trucks (barely) running. They speak openly and honestly with one another. They have one another’s backs. They are, perhaps, a tad too faultless.

Sydney’s family members speak to one another only to make requests or demands. Having spent much of her life in the silent shadow of her older bother, Sydney understands silence and all its subtle nuances. For instance, she explains that there’s “the kind that means not only that no one’s talking, but something very specific is not being said.” A lot of things go unspoken in Sydney’s household.

For example, Sydney keeps silent on the subject of her brother’s best friend, the unctuous Ames, an updated, more insidious Eddie Haskell, a frequent visitor, who clearly has ulterior motives. Her parents remain clueless, as her mom’s obsession about Peyton deepens, and her father continues to enable his wife’s denial. Readers will notice. So do the Chathams.

Sydney strategizes at length before speaking to her parents and rarely says what she’s truly thinking or feeling; a condition many readers might relate to. “You only really fall apart in front of the people you know can piece you back together,” Sydney notes. Clearly she does not trust her parents to pick up her scattered pieces. Wise girl.

It’s frightening for Sydney to step into the light after spending so many years in shadow. But with the help of the Chathams and her new friends at school (who are also “different,” but celebrate it), she does slowly emerge and attempts to find a way to forgive her brother for leaving a boy wheelchair-bound, and to bridge the ever-widening gap between her and her parents.

Saint Anything may seem like a quiet read at first, but remember what is said about still waters. What begins as a somber story, carefully narrated by a polite young woman, builds to a gripping and unexpected climax and a satisfying conclusion.