Sailor Twain or the Mermaid in the Hudson 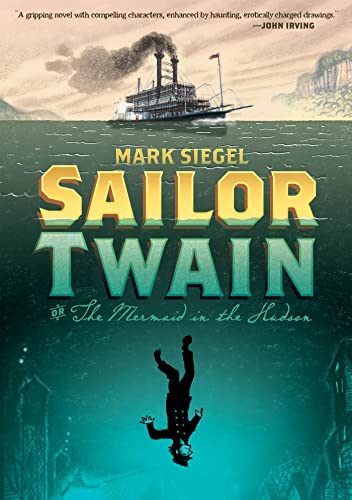 “. . . moving storytelling of the highest order.”

The river has been a source of life since documented history began. From the Nile, Yangtze, and Danube to the modern Mississippi and over to the Hudson on the East Coast of America, rivers have always been at the center of life and commerce.

Those who traveled these waterways depended on them for almost everything in their lives. This includes the materialistic needs of life, goods, cargo, food, and faster travel.

In addition to the work of life, rivers hold myths, storytelling, language, and often enough, love.

Sailor Twain or the Mermaid in the Hudson brings us back to the river. This stunning graphic novel reminds us that in an America no so long ago our highways were once water.

That water not only gave us life, but it could also take it away from us in a second.

The Hudson, one of America’s most important waterways, inspired as many myths and stories as its mighty American cousin, the Mississippi. Washington Irving used it to help create the early mythos of this country, in the process helping establish American literature.

After Irving, Mark Twain gave us life on the Mississippi. As he wrote of his river, he expanded on what Irving had created, showing us an America that had grown significantly over the time since Irving wrote of Knickerbockers and bowling.

Author and illustrator Mark Siegel takes the spirit of both Irving and Twain and working in the modern format of the graphic novel, brings both into the 21st century. What is amazing is the way he is able to do this while rooting his tale in their respective worlds: the Hudson River of Irving and the riverboat of Twain’s day.

Befitting modern times, the graphic novel opens in a manner that is part cinema, part shadow, part inference, and when each is so well combined, complete storytelling.

Mr. Siegel’s mixture of life, myth, and fantasy opens with an inquiry after the event. Looking out over the river the artist swoops down from above. In those first few panels we see a city choked by smog and industry, packed and dense with life, where the life of the river is never far away.

The company of a lonely captain has been sought out by a stranger. As the stranger reveals what he can, the captain reveals little, if anything at all. Our introduction closes with a question that makes us want to move with them into the world in which the mystery happened.

Moving backward in time we learn of the ship that the captain once manned. We are met with a cast of characters offering little in the way of revelation but volumes in what drives each one. The story of the ship is as important as anyone else’s.

The story unfolds through the eyes of Captain Twain’s leadership and quiet confusion. Despite the relative simplicity of his representation—mostly two large circles for eyes and a triangle of a nose—his depth as a man and his ability as a captain are clear.

The self-importance of the others prevents them from seeing the captain as we do. The skill of the artist holds our private look into Twain’s world and mind.

The sequence where the cad Lafayette explains his wandering libido shows us a very human Captain Twain. Just minutes after passing judgment on Lafayette’s passion for finding delight in almost any woman, the captain finds himself confronted with a parade of women, each of whom reveals a small, sensual aspect of themselves that prior to his conversation with Lafayette would have escaped the captain.

His confusion at his own hypocrisy when it comes to women leaves him unable to concentrate on anything else. He has found a newly intriguing part of himself.

Late, unable to write and frustrated, he moves to the deck to find out who is singing. Along the way he encounters a mermaid hanging on for dear life to the side of his ship.

A myth of the river has physically entered his life, found through the seductive qualities of music.

Over time Mr. Siegel begins to build on the idea that we are all not just one thing. All of us comprise complexity and duality. He speaks of what can seduce and distract us through the mermaid’s song, but never fails to remind us of the beauty and possible horror that distraction might conceal.

The exploration of that duality is not just limited to Captain Twain or human existence. The novel moves through time and space, challenging us to find new meanings for the imagery.

From the underwater life of the mermaid to the possibility that we can actually visit the afterlife, we see more to life than we did previously.

The sense of touch is never far from the page as the life and feel and smell of the mermaid waft from the drawings—as do similar sensations of the river itself. Lafayette expounds on his love of women and lustily pursues them, but when confronted with real emotion in the form of the author Beaverton, he recoils. The intimacy of a sincere touch means more than the casual encounter.

Like the writer Beaverton is to his public, Lafayette is not who he thinks he is.

None of us really are.

Mark Siegel creates a world in which dreams of love fall together with the hard reality upon waking. He also creates moving storytelling of the highest order. We become part of his world. And when it ends we know more about both it and ourselves.

A marriage of graphic art and storytelling inviting you to return for multiple visits, opportunities to find something new and something unknown.