Safe from the Sea 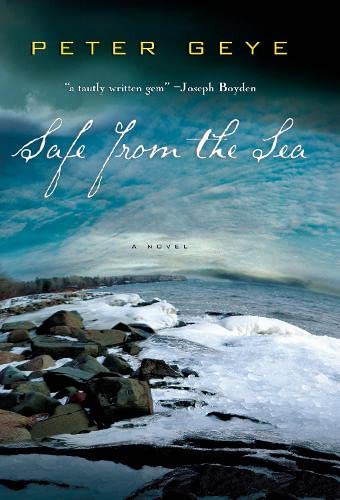 Shortly before his death, the comedian and social critic, George Carlin, decried the “pussification of the American male.” Carlin was complaining about the rise of materialistic, metro-sexual men in the 21st Century and pining the loss of the tight-lipped, broad-shouldered American men of the previous generation who—at least according to legend—made America great.

In the last 20 years, numerous narratives have focused on the tension between the burly dads of the World War II generation and their precious, college-educated sons. Two 1980s movies popularized this tension: Wall Street (greedy yuppie son redeemed by blue collar Dad’s simple virtue) and Nothing in Common (young exec reluctantly aids his faltering father and, as a result, becomes a better person). A generation later, we continue to see successful-but-shallow sons regaining their humanity through bumpy reconciliations with gruff-but-lovable working-class dads.

Peter Geye’s Safe from the Sea applies this plot template to northern Minnesota where the old mariner, Olaf Torr, is slowly dying, and his map-merchant son, Noah, comes to tend to Dad in his final weeks. True to the template, Olaf and Noah have painful unresolved issues regarding Olaf’s estrangement from his children and wife. Also true to template, Olaf and Noah, during their first days together, barely speak to each other. But the tough topics eventually get hashed out: Both men develop greater understanding and respect for each other. Noah is a better man at the end of the book than the beginning because he has become more like his dad. From a plot perspective, Safe from the Sea is a book that never leaves sheltered waters.

Fortunately, the undercurrents in Safe from the Sea are vastly more interesting than its central plot. Geye is a skilled and subtle observer. Throughout the book, readers are given an affectionate and perceptive view of roughhewn northern Minnesota, not only its Walden-esque lakes and forests, but also its thrifty and honest people. Even the hardscrabble bars of Duluth are endearingly painted. Geye also delights in showing the persistence of Norwegian culture in the region more than a century after Scandinavian immigration, evident in: names, food, a fondness for Edvard Grieg compositions, and Viking fatalism.

Geye also builds interesting subplots into Safe from the Sea. First, Noah and his wife, Natalie, are struggling to have a child, and Noah’s decision to go to his ailing father during her period of ovulation strains their marriage. Readers are shown a couple struggling with the possibility of ending up childless. Meanwhile, Olaf’s ailment remains mysterious through much of the book. Readers only gradually learn what is killing Olaf and why he is spending so much time in his shed; how and when Olaf will die becomes a tantalizing subplot unto itself.

Geye writes like an MFA, with all the good and bad this statement implies. Readers are treated to extensive descriptions of setting, and phrases like “the heavy pause between words freighted with circumspection.” This reviewer could do without this. Geye’s coloration of nearly every conversation, meal, lake, forest, and starry night is self-indulgent.

Peeves aside, Geye is a gifted storyteller. Parts of Safe from the Sea contain truly compelling narrative. For example, he offers a riveting tale of the sinking of Olaf’s ship, the Ragnarok (the end of days in Viking mythology). Geye might wince to read this, but he could be a first-rate adventure novelist. He also excels in creating characters who are ordinary and exceptional at the same time—high praise for any author. The characters in Safe from the Sea are maturely-crafted; there are no heroes or villains in the book, just good people working through tough issues with grace and good humor.

Like many first novels, Safe from the Sea is uneven. But make no mistake, it is a good and thoughtful read. We can expect very good things from Mr. Geye in the future.