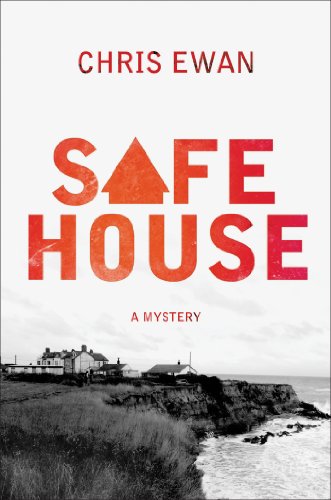 Safe House is a gripping mystery set on the Isle of Man, a British island located in the Irish Sea between Great Britain and Ireland within the British Isles. The author describes this locale with such reverence the reader can taste the salty ocean air and sense the pore-penetrating dew.

Protagonist Rob Hale is a plumber who wanted to follow in his father’s footsteps as a motorcycle racer, but unfortunately, stuck with a safer and more reliable career. He receives a call to fix a hot water heater at a cottage on a remote plantation on the isle and is somewhat concerned, for the caller has not identified himself.

Rob, accompanied by his faithful dog, Rocky, locates the isolated cabin where he is met by a shifty looking character wearing mirrored sunglasses. The man does not introduce himself, but leads him to the garage to the heating system. Walking through the kitchen, Rob notices another creepy looking guy—and a beautiful blonde woman.

The following day, Rob takes Lena for a ride, and they are involved in a horrendous crash. Rob wakes in the hospital severely injured and asks about Lena. The doctors and the police assert Rob was alone when the ambulance picked him up. They insist his brain injury has him hallucinating oven a woman who does not exist.

What is strange is that Rob’s sister, Laura, has died under unusual circumstances a few weeks prior. Though ruled as a suicide, Rob knows his sister did not kill herself. He describes Lena as having a strong resemblance to Laura and determines the two are somehow connected—but everyone claims Lena is a figment of his imagination.