Safari: A Memoir of a Worldwide Travel Pioneer 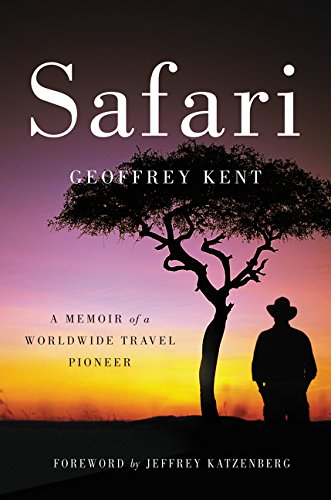 If that "Stay thirsty my friends" Dos Equis man hadn't been dubbed "The Most Interesting Man in the World," surely Geoffrey Kent could claim the sobriquet.

Kent, the dashing founder of Abercrombie & Kent, the world's leading luxury travel company, has had a helluva enchanted and fascinating life, spanning the world in its most exotic corners and meeting some of its most compelling characters.

Now he's put it down in writing and his first book, Safari: A Memoir of a Worldwide Travel Pioneer is a tell-all about where he was born (Zambia while his parents were on safari), how he grew up (on a Kenya farm amidst elephants, buffalos and leopards,) his carefree youth (speaking Swahili, hunting and playing polo, a sport at which he became world-renowned), his rebellious adolescence (a treacherous 5,000-mile solo motorcycle journey between Kenya and Cape Town), his coming of age (climbing Mount Kilimanjaro as a teen), his military career in the British Army (heavy tanks and polo in the Middle East), and his pioneering creation of a juggernaut firm that today fulfills the travel dreams of the rich and famous.

Kent is a patrician gentleman who sits easily on his riches and reflects on his charmed life gracefully. He reminds one of a cross between James Bond Indiana Jones, and Cary Grant. Kent is a fine raconteur, a polished man of action, a stickler for details, and a true connoisseur of the good life. He is the kind if gent you'd like to have as your best friend whether you are in a London club or out on a remote safari.

But he emerges as more than just a handsome, aristocratic face with a spirited past full of derring-do. His is a story of clever business decisions, often in the diciest of situations, gambles that could have cost him his life and his fortune, and a life jam-packed with adventure.

Safari is a good read, both to be amazed at Kent's gusto, vision, and entanglements and to be inspired at his accomplishments. His story is about adventure, about exploration and discovery, the very gifts he has always hoped to deliver with an Abercrombie + Kent journey. His story is also about what drives a man to try and satisfy his seemingly endless curiosity.

Geoffrey Kent really created the modern African safari industry. He opened up remote corners of the globe for us to see. He was a pioneer for eco-tourism and led the fight to respect and protect animals, indigenous tribes, and cultures long before it was fashionable. His mantra of "hunt with a camera, not with a gun” was seminal in the development of the modern safari experience.

Very few of us will ever play polo with the future king of England, motorcycle across Africa, attend Sandhurst (the West Point of England), or build a $500 million company that has had a major influence on the way we travel and perceive the world, but Geoffrey Kent has done all these things. And he had had fun doing them.

This is a memoir for armchair travelers and thrill-seekers, one man’s journey of wanderlust, challenges, exploration, trials, and tribulations. Lavishly illustrated with Kent’s original photos of his cherished memories and exploits, Safari is a book that shares all with us so we can vicariously get some of the thrills Geoffrey Kent has so much enjoyed.