Sad Monsters: Growling on the Outside, Crying on the Inside 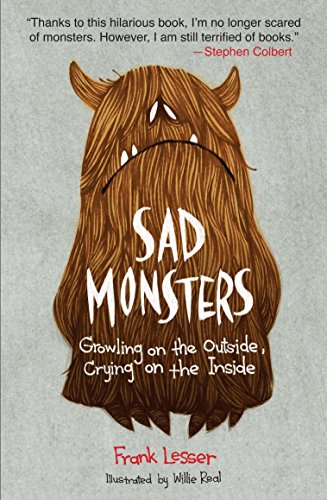 “Sad Monsters crackles with wit, irony, and sarcasm. No monster that terrified a film-going audience or kept a child up at night is safe from the comedic pen of Frank Lesser.”

Are you having obedience issues with your pet werewolf? Have you recently been romantically rejected by a vampire? Have you noticed that your physics teacher has the head and arm of a housefly?

Probably not. But if you did, Frank Lesser’s Sad Monsters: Growling on the Outside, Crying on the Inside would definitely be for you.

In this collection of humorous essays and snippets, you’ll learn that el chupacabra has other hobbies beyond sucking goats, such as dancing and public speaking. You’ll discover that you can’t call a genie Mr. Clean—only they can call each other that; and that there are spidermen that are not as cool as The Spiderman because they are spiders with human powers and can only climb walls if a ladder is involved.

Each chapter pokes lighthearted fun at some classic or mythic monster, from the Mummy to Bigfoot to banshees. And although each one can stand on its own— making this great reading for our ADD-characterized high-tech lives—several of them build on each other, making small references to a previous chapter. This makes the book as a whole more interesting, but at the same time doesn’t take away from the individuality of the chapter.

Mr. Lesser brings a strong background in humor writing to this little book; he is a writer for “The Colbert Report,” a contributor to I Am America (And So Can You!), and he has edited Brown University’s humor magazine when he was studying fiction and film there.

Sad Monsters crackles with wit, irony, and sarcasm. No monster that terrified a film-going audience or kept a child up at night is safe from the comedic pen of Frank Lesser.

Although this book favors movie monsters, television, literary and mythological monsters also get some “treatment,” for as the introduction states, “Many monsters suffer from psychological problems . . .” For example, can you imagine what it must be like for Medusa on the dating scene? And did you know that the Hall & Oates hit “Maneater” was actually a warning about the coming a Lovecraftian demon? And have you ever thought what it is like for the monster in your closet when you’re making noise all day? How can he get any sleep?

In between the covers of Sad Monsters you’ll get to read Godzilla’s diary, read “missed connections” adverts from a variety of supernatural creatures such as a succubus, a banshee and a demon, and learn about unconventional romances, such as that between mad scientist and his re-animated creature made from human parts.

Each chapter is easy to read and can be enjoyed on multiple levels. Whether you get the literary and film references or not, you’ll still find a chuckle or five in Sad Monsters.

Added to the humorous writings of Frank Lesser are the quirky illustrations of Willie Real. Each illustration captures the essence of the chapter, as well as the angst of the monster in question.

Sad Monsters is a book for monster-lovers and former monster-lovers alike. It is quick, light reading—perfect for short bursts of reading time, such as while commuting (not behind the wheel, of course) or sitting on the toilet. Just be prepared for the stares you’ll get when you burst out laughing!