The Saboteur: A Novel 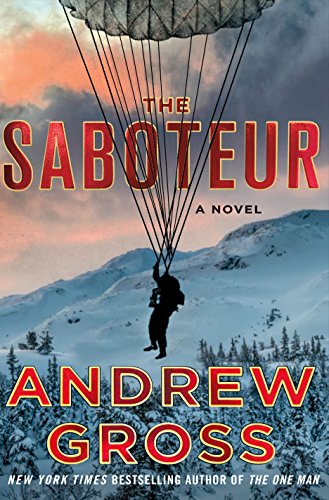 “the best, most exciting novel published this year. Action, suspense, heroism, sacrifice for a cause greater than the individual . . .”

Based on real events and a real Norwegian hero, The Saboteur by Andrew Gross is a suspense-filled novel fueled by nonstop action that tells the story of the race between Hitler’s Germany and the Allies to develop the nuclear bomb, and how the bravery of a few men sabotaged the Nazi efforts.

While the above brief description may sound like The Saboteur is a save-the-world story, it is not an exaggeration. The secret mission, code-named Gunnerside, and consisting of a small number of Norwegian patriots, very likely did save the world by sabotaging the Norsk Hydro factory in Norway which manufactured deuterium oxide or “heavy water,” used in Nazi research into making an atomic bomb.

Where Hitler would have dropped an atomic bomb if Germany had succeeded in developing one is unknown, but such a weapon would have resulted in tens of thousands, if not hundreds of thousands of civilian deaths, and condemned Europe and/or Russia to decades of Nazi dictatorship.

If the sabotage of the Norsk Hydro factory is not enough excitement and suspense, Gross’s novel covers the entire Allied effort to destroy the Nazi research program. The second part of the goal of eradicating Nazi research is the sinking of the Hydro ferry.

Although Gross tells the story of the sabotage of the Norsk Hydro factory and the sinking of the Hydro in the form of a fictional thriller—and an incredible thriller it is—those events did happen as descripted with very little embellishment.

Kurt Nordstrum, the novel’s protagonist, “is drawn from the real-life figure of Kurt Hankelid, an unassuming, yet courageous man, whose irrepressible will and sense of duty helped pull off the most important and improbable sabotage of WWII.”

Kurt and his friend, Jens, part of the Norwegian resistance movement now in disarray, are hunted by the Nazis. Kurt is given a microfilm by Einar Skinnarland, an engineer who feeds information to the Resistance. The microfilm must be given to Leif Tronstad, the former director of the Norsk Hydro factory, who is now in England, an officer of the Free Norwegian Army.

England is more than a thousand miles away, and in between Norway and England are hellacious winter weather and German patrols. Even though neither Kurt nor Einar know what the vital information is, both are determined to deliver it.

How the two men along with several others make it to England is the first in a series of unbelievable but nevertheless true heart-stopping events. “. . . the fastest way to England would be by ship,” Nordstrum said, turning to Eimar.”

In answer to Einar’s hesitation, Kurt remains him that “We’re Vikings, aren’t we? . . . For Vikings there are always ships.”

The group arrives in Scotland aboard a hijacked ship after a hair-raising trip that involves surviving a Nazi air attack. Kurt gives Tronstad the microfilm, but he still doesn’t learn exacting what is being manufactured at Norsk Hydro that is so vital to the Nazi war machine.

Kurt and the other Norwegians train in the Scottish highlands with members of an elite British unit of paratroopers, but when the secret mission to blow up the factory, the secret committee overseeing it choose to send the British paratroopers rather than the Norwegians. Tronstad disagrees. “The Scottish Highlands are one thing. But none of them have ever faced the fierceness of a Norwegian mountain storm, which can spring up without warning.”

Tronstad is overruled and 40 British soldiers in two gliders towed by two transport planes take off for Norway. Forty British soldiers and the crews die on the unforgiving terrain of Norway before firing a shot or setting off an explosion.

Tronstad and British officer argue for another attempt, this time with a much smaller group consisting of all Norwegians, plus one American of Norwegian descent. Although plans are made for the survivors—if there are any—to escape to Sweden after the plant is blown, Kurt and his group believe it is a suicide mission.

It is a testament to the unimaginable courage and determination of Kurt and the other Norwegians who accompany him, their sense of duty, not only to their homeland, but to the rest of the world, that motivates them to take on a mission so likely to end in their deaths.

Besides the human characters, there is a nonhuman character that at times dominates the story. It is Norway’s winter weather, particularly on the vidda, a plateau that is the most dangerous and desolate region in Europe. Gross’s descriptions of the winter storms are vivid enough to make one reach for a winter coat even if sitting in a centrally heated house.

“The winds sharpened into icy gales, howling like sirens; frozen snow, hurled around like sand in the desert, bit at their eyes. Large drifts piled up around their skis, making every step a task, the weight of the packs on their backs bringing them to a virtual halt. Visibility became zero.”

Even in heavy winter clothing a man will die in a few hours without shelter. Even northmen, as the Norwegians called themselves with pride.

The Saboteur by Andrew Gross is the best, most exciting novel published this year. Action, suspense, heroism, sacrifice for a cause greater than the individual are themes that make this novel the prototype for a true thriller. No fan of action-adventure novels filled with accurate historical detain can fail to add The Saboteur to his must-read list.