Rust in the Root 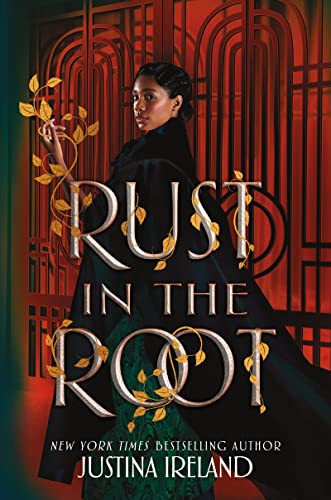 “Rust in the Root is an absolute delight of a book, with thick worldbuilding, a complex magic system, discussions of race, power, gender, and sexuality—all wrapped into a fantastical adventure.”

One part alternate history and one part high fantasy, Rust in the Root combines Ireland’s signature dark magic/zombie vibes with a complex magic system to give a unique take on the early USA.

Laura Ann Langston has just moved from Pennsylvania to New York in the hopes of getting her mage license and, eventually, becoming a baker. Life has other roads in store however and, after getting advice from a sketchy unicorn and eventually being tossed into prison, Laura Ann gets recruited for monster hunting. It is the type of monster hunting that only Black mages do, because they are the expendable ones.

‘‘‘Did you want to order food?’ The waitress reappears like an apparition and eyes me in that half-defensive, half-angry way white folks always look at Negroes, like I might turn her into a frog and then swipe what’s in the till. I consider telling her that the black don’t rub off and my ravels aren’t the spiteful kind, but that wouldn’t assuage her fears.’

“‘For hundreds of years, all the way up until the end of the Afrikan Genocide in the 1860s, Mechomancers had huge factories and compounds filled with enslaved colored folks. The Necromancers they employed would draw the life out of them, using their souls to power their constructs. The slave trade and the power of white Necromancers made Mechomancy what it is today, and this country was built smack dab on that foundation.’”

The reader is then treated to a journey much like in Dread Nation, where race and power are examined amidst the backdrop of the fantastic. Unique to this book is the complex, hierarchical magic system that is well worth of the title “high fantasy.”

“All the mystical arts function in a similar way, using a layer of global, interlocking power known as the Dynamism (see: DYNAMISM, page 26) to influence construction of materials and manipulate their most basic properties. This should not be confused with Mechomancy, which uses distilled energy to power manmade constructs and more closely falls under the umbrella of scientific manipulation (see: MECHOMANCY, page 234). The traditional arts mystic arts are often referred to as ‘lower arts,’ a colloquialism that has become more widely accepted in the wake of the proliferation of Mechomancy and its increased global influence in the nineteenth century.”

Of particular note in the book is the flawless integration of queer alternate history, from Laura Ann’s crushes to the simple addition of women in generalized speech.

“Most likely she’s heard the stories, the ones of powerful Negro mages, men and women both, charming white women so they could have their way with them, savage in their appetites. As if the Jim Crow laws in the South would exist if colored folks were that powerful.”

“The only reason I even have curtains and a threadbare quilt is because of Simone. She used to live in the room next to mine, turned tricks for money—that is to say, she raveled without a license for questionable characters in shady places. I’d been a little sweet on her and thought maybe my feelings were reciprocated a bit.”

The gender-shifting Ligahoo, with whom Laura Ann strikes up a potential romantic relationship, is a delightful character who adds a much needed dab of random chaos to the story.

Readers familiar with Christian stories will find amusement in the retellings of classic tales with a more magical twist.

“It’s Tuesday, so Mama would be at her weekly church meeting trying to convince Pastor Riley that Jesus Christ was reborn not through the power of Juda’s Necromancy or the Elemental abilities of the rest of the apostles, but because Mary was a Floramancer of great strength.”

Humor is an undercurrent in the book, which runs more YA horror/dark fantasy than anything else. Near the very end of the book, however, readers are treated to a tone break in the form of a very young and earnest dragon.

Rust in the Root is an absolute delight of a book, with thick worldbuilding, a complex magic system, discussions of race, power, gender, and sexuality—all wrapped into a fantastical adventure. Justina Ireland has written a story that any fantasy lover should be thrilled to read to their children or just enjoy on their own.