The Russian Dreambook of Color and Flight: A Novel 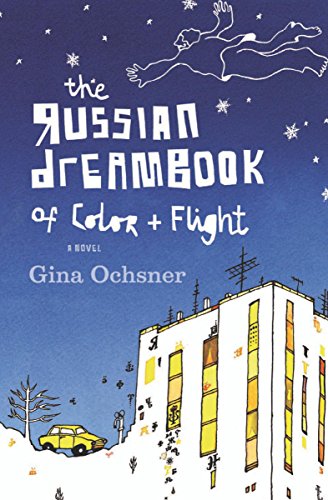 When reading Gina Ochsner’s The Russian Dreambook of Color and Flight, I kept asking myself what, exactly, this book is. It is a parable, limned with metaphors? Is it magical realism? Is it a gritty and unforgiving portrait of modern Tblisi, Russia? Is it a dreamy fable of strange orphans, angry ghosts, poetic rituals and unrequited romance? Is it a fable or zeitgeist novel? The answer is simply yes. It is.

The Russian Dreambook of Color and Flight is full of irony and raw humor. The local newspaper, The Red Star, prints no facts. The local museum, The All-Russia All-Cosmopolitan Museum, exhibits fakes—from masterpiece paintings down to fetuses in jars—which are completely fabricated out of foil chocolate wrappers, paper bags dipped in wet flour paste, chewing gum, and nail polish.

The characters faithfully perform their jobs without pay. And Zoya, the materialistic beauty queen, “lives entirely for industrial cosmetics.” Ochsner’s humor is at its darkest and most wicked when the Americans of Russian Extraction for the Cause of Beautification visit the museum and are horrified by the fetus display, the careful reconstruction of which the museum—and our protagonist Tanya—is particularly proud.

The central imagery of the novel comes from Tanya, from whose dreambook we get the title. Tanya keeps a notebook of hopes and dreams and vivid colors, which becomes a kind of vessel for all of the characters’ dreams, all of their hopes. Despite the potential for overbearing “preciousness,” Ochsner keeps her prose spare and delicate, lending the story a matter-of-fact spareness despite its fanciful turns. In this particularly beautiful passage from the novel, Tanya is trying to reconstruct the face of her dead mother by looking at her face and her grandmother Lukeria:

“Tanya sank into the chair opposite Lukeria and opened her cloud notebook. If she superimposed that horizontal scoring of her grandmothers’ forehead and the deep crow’s feet at the corners of her eyes over her own doughy half-finished face she could translate cloud to image, translate water to woman, and bring her mother back, as long as they two, grandmother and granddaughter, sat at the window.

Today the grey is a hueless hue hovering between light and dark. I want to know you by your eyes, your lashes, your hands, your teeth. Instead you are light dampened by windows, colour with the noise turned low.”

To anchor the rich imagery and lightness of the book, Ochsner pays equal deference to the sadness and gloom of modern Tblisi. The apartment building that houses the characters is rank—the characters use an outhouse next to the gigantic trash heap in the courtyard. A lowlife failed mobster charges them for their visits; strange glue-sniffing orphans throw rocks at them as the residents enter and exit the courtyard; a neighbor throws himself onto the trash heap, his body not recovered for days.

A war in Chechnya churns in the background. In addition to the great indignities of their lives, there are the small ones: the man who forces sweet, traumatized Yuri to pay for ice fishing on the river; the puddle of dirty water that splashes on Tanya on her way to the museum; the pneumatic tube that sucks Ogla’s ring off her finger. There are no safe exits for the characters in Ochsner’s Russia. It is a testament to Ochsner’s skill as a writer that these stark, difficult elements are as engaging to the reader as the humor and lightness in other sections of the novel. She sets up a delicate balance, and maintains it beautifully.

The only shortcoming in the novel is that it doesn’t hang together around a central, focused event, but rather unspools from one character to the next. Toward the end, Ochsner introduces a unifying event for the characters, but even this is handled loosely. In such a delightful book, I don’t imagine a reader will miss the more conventional novel form for this loose collection of lives. The ultimate triumph of The Russian Dreambook of Color and Flight is how effectively Ochsner has painted this strange, chiaroscuro world, and how beautifully that world remains with the reader, even long after the book is closed.