The Russian Cosmists: The Esoteric Futurism of Nikolai Fedorov and His Followers 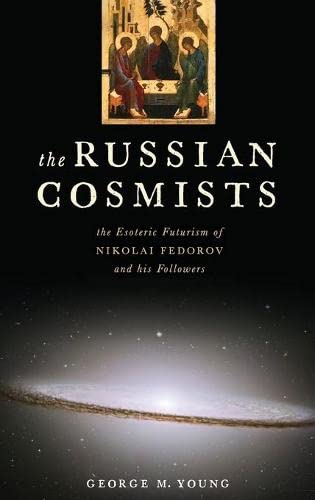 “. . . merit[s] a wide readership [but] the author’s message will need to be further amplified, interpreted, and disseminated by others.”

The scope of The Russian Cosmists embraces the inherent contradictions that so characterize genius, manifested as yin and yang with a Russian accent: the earth as a self-directed, literal “spaceship” vehicle roaming the cosmos, rather than existing in a set place within the cosmos; the rejection of the inevitability of death, posited as the central work of society; the Age of Aquarius meets rocket science and the ‘positive mental attitude’ thinking of W. Clement Stone, Norman Vincent Peale, and many others; the intellectual inspiration of the Russian literary greats and much more.

As its name suggests, the concerns of this singular philosophy, embrace the cosmos. And its very essence is informed by the singular geography of Russia, especially the ethos of the place.

The spiritual geography of Russia is contemporarily evidenced by the fact that in the 1990s, two in five nonfiction books sold in Russia dealt with some aspect of the occult.

The great diversity and scale of Russia—often reflected in polar contradictions, coupled with the vastness of its largest country land mass bridging Asia and Europe, spanning eight time zones, and whose harshness defeated Napoleon Bonaparte’s empire dreams—contribute to a singular spiritual geography.

This highly distinctive sense of place is manifested by Russians living large and thinking big.

Thinking big is a singular Russian attribute, most visibly manifested by Peter the Great’s expansive visions, including the glorious St. Petersburg.

While the Russians’ living large theme is featured in the contemporary media—the great fortunes of the newly rich post Soviet crony capitalists funding fabulous rich and famous lifestyles most evident in recent years with Russians emerging as highly visible owners of many of the world’s most lavish, luxurious, expensive personal residences—less recognized is the Russian thinking big theme.

A half century ago the ambition, even audacity, of the Sputnik rocket launch transformed the world’s perceptions of place and the possible. The extraordinary Russian sense of place informs and is expressed in the distinct philosophy of Russian Cosmism, whose shorthand brief definition is an eclectic admixture of spirituality and science, magic and math, Ken Wilbur meets cosmic creativity.

The Russian Cosmists: The Esoteric Futurism of Nikolai Fedorov and His Followers is a fascinating, mind expanding, highly informative magical mystery tour of a distinctive school of New Age thinking. Russian Cosmism’s embrace of big ideas is especially noteworthy at a time that society, especially in the early phases of the 21st century seems dominated by minimalist poverty level thinking rather than expansive abundance thinking.

The author’s description of Russian Cosmism exudes the inherent contradiction: “one of the most vigorous and productive” of the “rediscovered intellectual tendencies . . . a highly controversial and oxymoronic blend of active speculation, futuristic traditionalism, religious science, exotic esotericism, utopian pragmatism, idealistic materialism.”

In short, “higher magic partnered to higher mathematics.” This recitation of contradictory pairings reminds us of the trenchant assessment that intelligence is the capacity to hold two contradictory ideas concurrently.

Nikolai Fedorov personified the very essence of the soul of the place of Russia: so immense as to be vague—notwithstanding sharp and stark features so diverse as to be incapturable in a cohesive narrative—concurrently embracing and displaying such contradictory extremes as the natural and the orthodox, kindness and cruelty, humility and arrogance, individualistic and universal.

Committed to bringing about a new world view, Fedorov dedicated himself to exerting great influence on major Russian thinkers and artists, and worked prodigiously to achieve his aims, yet produced work disproportionately diminutive relative to the intellectual majesty, arc of ambition, and the personal resources devoted to his agenda.

George Young makes the case that much of what Nikolai Fedorov advocated is increasingly acknowledged in the post Soviet period. Today in Moscow there is an active Fedorov Museum-Library dedicated to his work and ideas, which are the subject of a growing body of academic research disseminated via books, papers, and conferences. Fedorov and Cosmist studies are also are pursued in a number of centers in multiple places in Russia. The elite of the Russian intellectual community participate in conferences dedicated to his life work.

Reviewing a diverse, comprehensive catalog of the work of the Cosmists, the author concludes “Perhaps the most important contribution the Russian Cosmists have made to modern intellectual life, however, is to offer a centered, directed, positive vision in a largely uncensored, rudderless, negative time.”

This vision exudes assertive pro activity, rather than passive acceptance, which very can do orientation mirrors the Russian character, reflecting the spirit of a place whose very scale challenges the perceptions of those from countries of much lesser scale. Thus, the Russian worldview is cosmos-centered rather than earth-centered.

Notwithstanding an esoteric, uncommunicative, and obscure title, George M. Young has written an important book, employing impressive erudition and insight applied across vast libraries of work authored by a daunting roster of eminent scholars and intellects.

The author’s task is formidable, inasmuch as his subjects “were polymaths, not only interested in but highly competent in two, three, or half a dozen specialized disciplines. As philosophers, artists, natural scientists, theologians, and social activists, individually and collectively, they tended to be encyclopedic in their erudition, jacks of all intellectual trades and masters of most. Each was so highly respected in at least one recognizable field that his cosmic speculations—even if unorthodox—borrowed at least the possibility of legitimacy.”

The Russian Cosmists merits the attention of those interested in literary fiction, physical science, health and longevity, spirituality, philosophy and religion, Russian history, and (7) magic and perception: what may be observed to contradict presumed rules and principles in the interplay of patterns and anomalies.

As much as the ideas in this book merit a wide readership, they will be challenged to reach the audience it deserves. In a way, this reality mirrors the life of Nikolai Fedorov, who though he perceived his ideas to be of the greatest importance to the future of the human race, during his lifetime wrote only a few anonymous newspaper articles. Just as the subject of this book depended on his followers to take his word forward, so, too, does it seem that the author’s message will need to be further amplified, interpreted, and disseminated by others.