The Russia Trap: How Our Shadow War with Russia Could Spiral into Nuclear Catastrophe 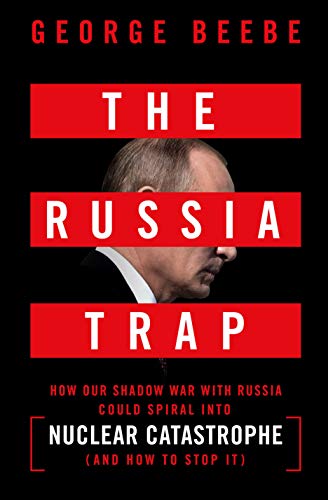 “Anyone seeking to understand the deepest issues in world affairs should read this book, absorbing its positive contributions and debating whatever seems questionable.”

The Russia Trap argues that the danger of nuclear war today is greater than in many previous decades. Starting in 2018, the Bulletin of the Atomic Scientists has moved the hands on its doomsday clock to two minutes before midnight. To appreciate how we got here and what to do next, this book should be read and internalized by political and military leaders everywhere and by any citizen concerned with human survival.

The book explains how US-Russia relations moved in one or two decades from limited cooperation to deep distrust and antagonism. This book cogently explains how multiple factors have pushed world affairs to this tipping point and what safeguards and shock absorbers should be installed to prevent Armageddon.

The author is no naïf. George S. Beebe is the former director of Russia analysis at the CIA and an adviser on Russia to Vice President Dick Cheney. He is now vice president and director of studies at the Center for the National Interest in Washington, DC.

How in dealing with Russia can the United States avoid the Scylla of overreliance on hard power and Charybdis of appeasement? How can Washington—and Moscow—avoid misperceiving their interactions in ways that trapped the great powers into war in 1914?

All participants need a new paradigm—a recognition of the complex system in which they compete but need not behave as enemies. Each side should acknowledge that it both generates and faces complex challenges. Actions by Americans as well as Russians and by others, from China to Iran, contribute to the networks of pressures facing each actor. Now, even more than during earlier crises, such as Cuba 1962, the time available to leaders to make critical decisions has grown shorter, thanks inter alia to new media and to cyber weapons, even as mounting uncertainties and ambiguities cloud perception.

Nuanced depictions of the complex factors shaping the system lead Beebe to this conclusion. The prevailing American paradigm is that aggressive Russian actions (“Putinism”) threaten liberal democracy and that the best way to respond is to “escalate-to-deescalate,” i.e. contain and repel Russia by growing and flexing U.S. hard power, compelling Moscow to compromise on whatever issues can be finessed.

The current paradigm, Beebe argues, misunderstands the drivers of Russian behavior. It assumes that our primary challenge is a deterrence problem. In fact the greatest peril is “an escalation spiral that our own actions, along with Russia’s, are helping to fuel rather than tame. . . . We are far too fearful of Russia’s intentions to destroy democracy, but not nearly war enough about the chances that a broad mix of systemic factors could combine to create a disaster we do  not see coming.”

The book’s first half—an explanation of how we got here—is stronger than the second half—what to do now. The first half, “Understanding the Problem,” describes in cogent and concise terms many of the key events that seemed to end the Cold War and then renew it; for example, the Intermediate-range Nuclear Forces (INF) Treaty signed in 1987 and ended under Putin and Trump.

The second half, “Managing the Problem,” offers the author’s appeal for a new paradigm and how to implement it. Here there is a contradiction. Beebe argues that the United States is wrongly fixated on the Russian threat to liberal democracy. But the present and growing danger, which he also describes, is a potential escalation spiral involving new weapons that make a first-strike thinkable and adequate defense unlikely.

The book’s deeper weakness is its tacit assumption that top leaders in Washington and Moscow, and their domestic constituencies, are rational actors seeking to apply reason to their international and other problems. In reality, the US president has shown his complete indifference to Russian or other threats to US democracy. Nor has he talked much about new Russian weapons that need to be countered.

Instead, he has authorized increases in the US defense spending mainly to please his backers among hungry defense contractors. Far from any concern about Russian aggression in Ukraine, Trump has sought Ukraine’s help in diminishing Russian responsibility for interference in America’s 2016 election and in blackening the reputation of political rival Joe Biden.

Putin may be less myopic. He does have grounds for believing that Washington has relegated Russia to the status of what Obama called a “regional power.” But Russia’s president also seems motivated primarily by concerns for his own image, wealth, and political power. If Russia has a hypersonic weapon, he wants it seen as Putin’s hypersonic.

Nor can one assume that the US and Russian public want farsighted, rational thinking by their leaders. Many Americans, including many in Congress, seem indifferent or even hostile to science. They prefer to bite on whatever red meat is thrown to them by White House propaganda. Russians, whatever their own woes, have been pleased by Putin’s moves to rebuild the old tsarist/Soviet empire.

One can argue also whether the “complex system” paradigm is new. For decades critics of US policy have argued that American actions as well as Soviet fueled the Cold War and arms race. They saw repeated patterns of action-reaction, beginning with US flexing of its short-lived nuclear monopoly. No matter who started the Cold War, both sides sustained it.

The erstwhile champion of “containment,” George F. Kennan, warned in the 1990s that expansion of NATO to Russia’s borders was a catastrophic mistake. Many if not most Soviet experts concurred. Beebe recommends that NATO return to its original mission of containment, avoiding support for anyone in Kosovo or Libya, but this is not a novel idea.

Stuart Kauffman and other complexity scientists argue that societal fitness is measured by a society’s ability to cope effectively with complex challenges and opportunities. By this standard, neither the United States nor Russia or any of the other nuclear-weapons owners are fit. All fritter away their capacities to cope with urgent internal needs and the global challenges of climate change. Their misperceptions as well as the potential escalation spiral described by Beebe undermine not just national but global fitness.

Anyone seeking to understand the deepest issues in world affairs should read this book, absorbing its positive contributions and debating whatever seems questionable.