A Rush of Blood 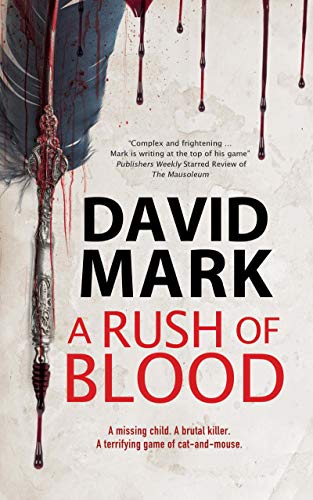 “the story as a whole is deftly presented and shows exactly why David Mark is being recognized as a writer of complicated and frightening plots. A Rush of Blood may be his most intriguing novel yet “

“Meda. She was my friend and I was hers and if I think about anything other than that, I might find myself conjuring up images of her worse moments.”

Ten-year-old Hilda’s mum, Molly, owns the Jolly Bonnet, a pub with a theme. It’s the kind of place where “Guy Fawkes might meet with his co-conspirators,” but its main attraction is the Wanted posters of Jack the Ripper hanging on its walls and a snug room named after one of his victims.

The Jolly Bonnet’s patrons are a motley bunch, such as Lottie, a pathologist who is also a You Tube vlogger on the subject of morbid anatomy, samples of death art, specimen jars, and Victorian medical equipment, and a plethora of Goth-types.

It’s here that Hilda spends her time between school and attending dance classes with her friend Meda, child of Lithuanian émigrés—until the day Meda doesn’t show up for class.

Her family insist she’s away for a visit with relatives, but Hilda doesn’t believe that. Her persistence discovers that Meda has disappeared, and her family is waiting for a ransom request.

Hilda’s concern urges Molly to try to help. She finds herself teamed up with Karol, a man Meda’s family insists is “taking care of things.”

“A dark outline forms into the silhouette of a tall, broad-shouldered man. He’s a little older than Molly. There is a dark stubble covering his cheeks and his black hair is speckled with grey in a way making it seem he has been haphazardly painting a ceiling.”

She doesn’t doubt Karol’s way of handling things involves the wrong side of the law but in this case, who cares? The aim is to get Meda back, so she tolerates him. The fact is he’s handsome, “in a brutish, brooding sort of way,” and whether she wants to admit it or not, she’s attracted to him.

“Karol extends his hand, the cool rough skin of his palm touching her damp cheek. Then his hand is closing around hers and he is pulling her behind him into the darkness.”

When ransom demands don’t come, Molly goes to Scotland Yard. She’s wondering if this is a hate crime, because several Lithuanians have been attacked recently. There, she’s told another girl about Meda’s age and much like her in appearance, disappeared earlier, only to be found later in the river. The police have mapped out Meda’s last known movements, and learned of a homeless man whom the girl considered a friend. She often bought food for his dog.

The only problem: When they go to interview him, he can’t be found.

“A police constable is indiscreet with the little information he had. A tramp’s body had been found wedged beneath a riverboat in the canal. His dog had been making a nuisance of himself on the bank, howling for days on end.”

Then Meda is found, “pushed from a moving car onto the hard, damp road.”

That should be a relief, but it isn’t. What bothers Molly is that Hilda also resembles Meda, and the killer may now be stalking her own daughter.

This is definitely a chilling novel concerned with a man whose fixation involves trying to keep alive the memory of his own dead child.

It’s a difficult story to read, not only because of the subject matter, but also because of the use of various points of view to tell it. There’s Molly’s point of view, told in the third-person past and Hilda’s told in the first-person present. There’s the killer’s own interpretation of events, and the narrative is also interspersed with notes from a pathologist to the investigating officer of the case, magazine articles and interviews, and letters—all by people not directly involved but providing unexpected twists and cogent facts important to the narrative.

Jumping from one viewpoint to another, as well as the sudden changes in tense may lead to some confusion, and possibly irritation, to a few readers. To those of the more sensitive variety, the many references to blood and various body parts and medical procedures may also be a bit grim.

Nevertheless, the story as a whole is deftly presented and shows exactly why David Mark is being recognized as a writer of complicated and frightening plots. A Rush of Blood may be his most intriguing novel yet.