American Runway: 75 Years of Fashion and the Front Row 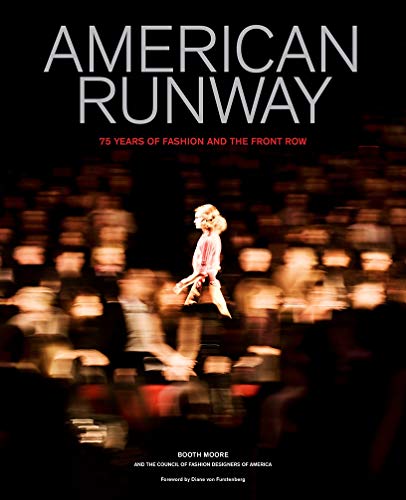 American Runway will disappoint many for a variety of reasons. Right from the very start there are, let’s say, gross exaggerations and even some text that will mystify the reader with its context and content.

There are two instances that stick out: one is that there were “1000s” of department stores in the 70s and second “if asked to list prominent American designers most of us would come up with a few: Ralph Lauren, Calvin Klein, Marc Jacobs, Tory Burch and Tommy Hilfiger perhaps” . . .  Perhaps not! Somehow names that come to mind are Charles James, Norman Norell, James Galanos, Halston, Bill Blass, Geoffrey Beene, and a slew of others but Tory Burch and Tommy Hilfiger? Really?

So this reader/reviewer found the start of the book very off putting. Then what suddenly became apparent was that this book is a sales pitch or maybe justification for fashion to be accepted as a source of entertainment for all to enjoy. Runways were intended as a business function (stores, press, private customers) and fashion still remains a business since no matter how grand the spectacle or how many super models walk, the sales are what really matter, not the hype. Upon closer examination, one then discovers that the book is written by Booth Moore, who is the fashion editor for the Hollywood Reporter . . . hardly a fashion bible . . . entertainment anyone? Always consider the source.

While there is a well-documented history of the New York fashion scene, which includes a somewhat sketchy and highly selective and curated history of fashion show venues and designers, there seems to be more than just a few who seem to have been omitted; If memory serves, there were Michael Vollbracht shows in bank lobbies and at Circle in the Square theatre and yet not only are those locations absent from the text but so is the designer.

The author most certainly focuses on the last 30 years or when he credits the rising entertainment factor with supermodels and the very trendy designers of that moment as being the impetus. It is almost as if the first 40 years or so were nothing more than a warm  up of amateurs paving the way for the likes of the generation X designers.

It is understandable that not every name can be mentioned, but it is not understandable that truly prominent names who built the fashion business in New York City are slighted if not totally erased from its history. Maybe this reader takes it all too seriously, but most fashion readers want to be informed with facts that may not have been available before or with little known stories and anecdotes of a once vibrant Seventh Avenue.

To its credit, American Runway devotes chapters to all the teams that make fashion shows possible, but again with heavy reliance on the last 25 years or so and not drawing from some of those who were the building blocks of runway fashion.

The advice here is to proceed with caution and with a grain of salt or two.