Running Against the Devil: A Plot to Save America from Trump—and Democrats from Themselves 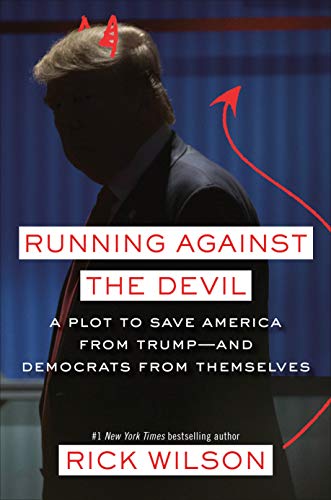 “The author is a ‘never-Trumper’ who used to work for the Republican Party when he regarded it as genuinely conservative. He knows how the party works . . .”

“Scum-bag” is the most fastidious term used by Rick Wilson to describe the U.S. president. The term also implies the kinds of campaign Wilson recommends to Democrats if they are to take on and defeat Donald J. Trump in 2020. The president and his entourage, says Wilson, know no shame and feel no moral or legal constraint on their operations to seize, hold, and benefit from power. Democrats will not beat them with a 400-page plan to improve health coverage. Instead, they must show just how corrupt the president and his assistants are by using investigations and TV—not with an impeachment effort sure to fail in the Senate or op-eds in honest newspapers.

Wilson points to a lot of delusions held by Democrats:
1. This is a national election. No, it is about 15 crucial target states, most of them reddish. Wilson favors what he admits to be “shallow, content-free campaigning. . . . If you need to beat a man who practices  pure, unadulterated opportunistic politics,” you need to do the same and surpass him at his game. “In a Walmart nation., don’t run on boutique issues.”+

2. Policies are a winning campaign issue. No. It is a waste of energy, time, and money to talk about how to finance health care or cope with the Taliban or court-packing. What Democrats should talk about is how Trump’s evil essence leads him to evil policies—not paying for preexisting conditions, separating families at the border, trade wars that hurt farmers, etc.

3.  Any decent liberal can win the black vote. No. Hillary got 4.5 percent fewer black votes than Obama. This cost her the election. She was the epitome of a white school marm. To win in the electoral college, Dems must have a candidate who gets at least 90 percent as many black votes as Obama.

4. Any progressive liberal can win the youth vote. No. Nobody can be sure of getting youth to vote. Old people vote, not young ones. And old people don’t like progressive slogans. Having grown up in the Cold War, they equate socialism with communism.

5, Most people are repelled by Trump’s daily torrent of lies. No. Many people don’t know what he says is lies. Many people don’t care. Many get a thrill from seeing somebody so high up get away with lies. “Many revel in the transgressive thrill of knowing the president . . . is spouting bullshit.” Wilson quotes Hannah Arendt: “The ideal subject of totalitarian rule is . . . people for whom the distinction between fact and fiction . . . no longer” exists. To cope with all this, the Democratic nominee must “drive hard on Trump as a liar, a discredited and weak man dependent on a curtain of absurd deceptions to maintain his fragile self-image. . . .”

6.  People love to hear Democrats preach. No. “You think you sound compassionate, but it often scans as hectoring. You think you sound righteous, but it too often comes across as one long scold from the political correctness commissars.” In flyover country (which decides the electoral college) voters damn you as “as condescending jerks.”

Wilson quotes a study of “tribes” in America. Far right and far left tribes are distinct minorities. Not just Democrats but most Republicans are moderate centrists. This surely means that Bernie Sanders, brought up in a “red diaper,” has no chance. Elizabeth Warren has some good ideas that amount merely to adjustments in the capitalist system, but her rhetoric and personality alienate a lot of voters.

Wilson gives practical advice on how the Democratic nominee should cope with Trump attacks on TV and on the debate stage. To some attacks, just say, “Bullshit!” To others, laugh If the Donald gets too close (as he did Hillary), just touch him. Point out how his promises have gotten us nothing. Farmers, for example, are among the losers from the trade war. If abortion comes up, go back to Bill Clinton’s mantra in 1992—that abortion should be “safe, legal, and rare”—and discard the expansive and absolutist defense of abortion championed by some Dems.

The model posture for the nominee should be derived from John F. Kennedy, Bill Clinton, and Barack Obama—optimistic, composed, not too radical. Don’t follow Michelle’s advice to go high when they go low. “When they go low,” Wilson says, “you bring out the goddamn flamethrower.”

Wilson’s flame, as hinted in this review, is very big on four-letter expletives, presumably because he deems this necessary to push Democrat elites toward the necessary language to reach the common man (if not the common woman).

The author is a “never-Trumper” who used to work for the Republican Party when he regarded it as genuinely conservative. He knows how the party works—or worked—from the inside. His get-tough-in-the-street strategy is a far cry from the elevated thoughts of Michelle Obama in Becoming or Samantha Power in Education of an Idealist, both reviewed here in 2019. Their blend of idealism and realism could make a reader feel good about struggling for a better world. But if Wilson’s tactics are the only way to wrest the White House and save America from a band of miscreants, some readers will prefer to emulate the legendary St. Jerome and retreat to a cave and study the Holy Writ.