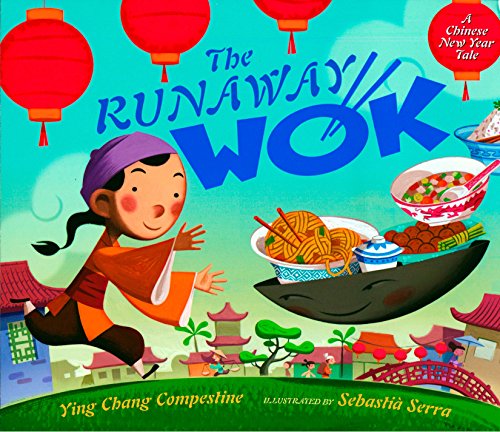 Ying Chang Compestine delivers a delightful spinoff on the fairy tale Jack and the Beanstalk with this Chinese New Year Tale.

In this story, there are no beans, but there is a magical wok. And what magic it creates! On Chinese New Year’s Eve, the Zhangs, a poor family in Beijing, send off their son with a few eggs to trade for a bag of rice. They want to make stir-fried rice to share with the neighbors on this, the most important holiday of the year.

As the Zhangs bid the boy goodbye, they wistfully lament their lack of resources, wishing they worked for the Li family, the richest family in Beijing, so that they might have enough to invite everyone over for a New Year’s celebration—a wish that seems woefully out of reach.

Ming, their young son, heads off to the marketplace, dreaming about what a real feast would be like and how “nice it would be to have just one new toy to share with his friends.” On the way there, a stooped old man stops him and offers to exchange a rusty old wok for Ming’s eggs. Ming demurs . . . that is until the wok bursts out into song. So he makes the trade.

His mother, of course, is less than pleased. But then the magic begins. The wok cries out,

“Mother make me shine so bright,
and you shall have food to share tonight.”

Having nothing to lose at this point, the family decides to do what the wok says. Once shiny and sparkling clean, the wok “skippity-hoppity-ho”s off—all the way to the Li house where Mrs. Li fills it up with all sorts of yummy foods. Little does she know that the second she turns her back, the wok will “skippity-hoppity-ho” all the way back to the Zhangs.

SPOILER ALERT: In this manner, the wok continues to bring home surprises from the unwitting Li family until the Zhangs have assembled the Chinese New Year feast of the century in which all the poor people of Beijing are invited to partake.

Sebastià Serra’s lush, colorful, detailed illustrations add more magic to an already sparkling story. The mischievous, sneaky, charmed, furious, excited expressions on the faces of the characters are captured so perfectly that their exuberant emotions practically jump off the pages.

The only small issue I had was that the rich man’s son is alternately described as “weak” and “chubby,” the latter so much so that when he runs he loses “his breath.” That may be the case, but the weak and chubby children among us may not appreciate the characterization, which could have been easily alluded to considering Serra’s abundant artistic abilities as opposed to blatantly expressed in the text.

Librarians, teachers, parents, and children will also get to learn a bit about woks and details surrounding Chinese New Year in the author’s thoughtful endnote. And if you are starving after all that talk about feasting, the book includes a recipe for stir-fried rice. All in all, The Runaway Wok is a distinct pleasure of a picture book.