The Runaway Species: How Human Creativity Remakes the World 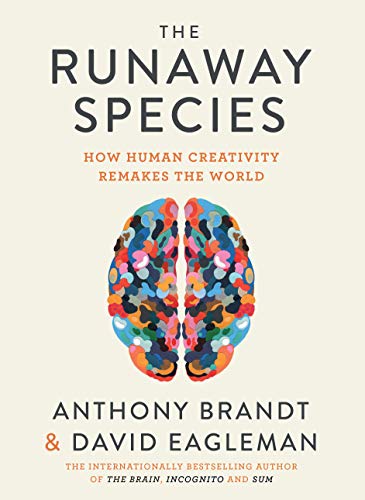 “No other species puts so much effort into exploring imaginary territories, nor does it seem so determined to turn the make-believe into the real.”

What underlies our ability to innovate, our drive to create? What makes us the only species able to remake our world on the enormous scale that we do? Answering these questions would be daunting enough, but composer Anthony Brandt and neuroscientist David Eagleman go further to explore where creativity comes from and how we might harness it to improve schools, corporations, institutions, and our individual lives.

“No other species puts so much effort into exploring imaginary territories,” nor does it seem so determined to turn “the make-believe into the real.” The book fleshes out this idea in three parts. The authors first introduce three principles they call Bending, Breaking, and Blending. Part II explores how the creative mind uses these approaches, and Part III explores cultivating creativity and what may lie ahead for us as a species.

Bending is “a makeover of an existing prototype through alterations.” Breaking is fragmentation. Blending “combines two or more sources in novel ways. Think of the Sphinx, the Minotaur, or a mermaid.” It is a small step from there to inserting the gene for spider silk, many times stronger than steel, into goats so that their milk glands secrete spider silk “on an industrial scale.”

Poet e.e. cummings invented a new way to use language by breaking up strands of text in novel ways. By breaking up strands of DNA into small chunks, early geneticists created a way to read the genetic code. Blending has yielded structural concrete that can heal itself, made Google translation a matter of statistics, and led people to tag millions of photos online while “computers do the bookkeeping.”

Readers familiar with David Eagleman’s writing will encounter the clever analogies that typify his style. Co-author Anthony Brandt, a professor at Rice University’s Shepherd School of Music, ads rich texture and scope to their speculations. It is not obvious what NASA and Picasso have in common. Nor what flamboyant hairstyles, bicycles, or stadium designs share. But the answers seem obvious once the links are pointed out

A small but annoying blemish is the repetition of clichéd phrase such as “under the hood,” “the DNA of its culture,” “looking in the rearview mirror,” “the rearview mirror of history,” and “the human hard drive.”

The book’s recurrent theme is how the brain achieves what it does at the least energy cost—especially via the unconscious forces that underlie all human behavior. Brains strive to conserve energy by predicting what comes next, yet they simultaneously “seek the intoxication of surprise.” Creativity “lives in that tension,” and the sweet spot between familiarity and novelty “is a moving target, hard to hit.”

The book is a paean to interneurons—the nerve cells interposed between sensory input and motor output. They constitute the bulk of our hundred billion neurons. But more important than the sheer number is their organization. It is an organization that sets up “a competition between automatic, habitual behavior, and mediated behavior, which defeats them.” With Zen–like penetration they say: life depends “on being able to do both.”

Having an enormous number of interneurons leads us to create “more abstract concepts.” Our well–developed sociability compels us to share our ideas with others. The marvel of human creativity “is not that new ideas appear out of thin air, but that we devote so much brain real estate to developing them.”

The authors cite George Washington Carver as an example of why generating options is the cornerstone of creativity. Given only 10 minutes by Congress to present his case that farmers should grow peanuts, he presented more than 100 ways of preparing peanuts in testimony that lasted an hour. In a similar vein Thomas Edison said, “when you have exhausted all possibilities, remember this: you haven’t.”

The authors venture into a fascinating discussion of extinction and show it to be a necessary, foregone conclusion that results from nature’s profusion. A frog lays hundred thousand eggs; 10 survive to become tadpoles; a few survive to become frogs. Prolific production likewise lies at the heart of creative mentality, one whose mindset also requires a climate that tolerates failure. Google glass wasn’t afraid to drop a product that wasn’t working.

Across history “new ideas take root in [such] environments.” Communist societies that stressed conformity have been much less creative than free ones. Innovation is “energized by upsetting routine,” and they quote painter Willem de Kooning as saying, “I have to change to stay the same.” They also show the problem with the trophies–for–everyone mentality common in schools these days: Praising achievement uncritically dampens students’ appetite for risk taking. Better to praise efforts, not results, and to make work meaningful.

The authors end with a probing essay on why the sciences need the arts, “a boot camp for bending, breaking, and blending.” More than teaching creativity, the arts steer culture. This is why authoritarian governments quickly clamp down on them. They easily engage in subversive criticism, satire, and parody.