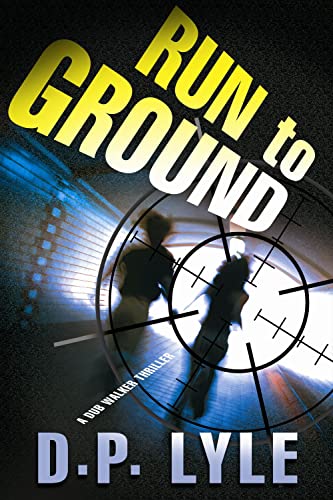 It’s something that happens all too frequently in our world: a child is abducted and murdered, leaving the parents destroyed, angry, and plagued by nightmares. Such is the premise of Run to Ground.

What makes this book intriguing is the alleged murderer of the child serves only a few months in jail on lesser charges because the murder charge is dismissed on a technicality.

Thus the parents, Tim and Martha Foster, are thrust into a world completely alien to their low key Christian life. As they extract their own revenge on the man they are convinced is responsible for their son’s murder, the consequences of their actions set in motion a series of events no one could anticipate.

The author, D. P. Lyle does a good job of laying out the case for the couple’s guilt, particularly the forensic evidence; however, before the law can close in on the pair, they initiate a detailed plan to conceal their involvement and identities, ensuring no one ever knows who they are, what they’ve done, or where they’ve fled.

The story’s protagonist, Dub Walker, methodically collects the clues left behind and formulates a logical scenario of what likely happened. As the pieces to the puzzle begin to fit, the story becomes almost predictable—that is until the author throws a couple of curveballs nobody will see coming.

Run to Ground is a well written and thoughtful story, a tale many readers will easily become engrossed in. One can’t help but like and feel sorry for the grieving parents. In addition, the story features several evil characters who keep readers guessing about what might happen next.

The book has several great twists, concluding amidst a series of surprising, thrilling events. Don’t miss this satisfying mystery written by a very talented writer.