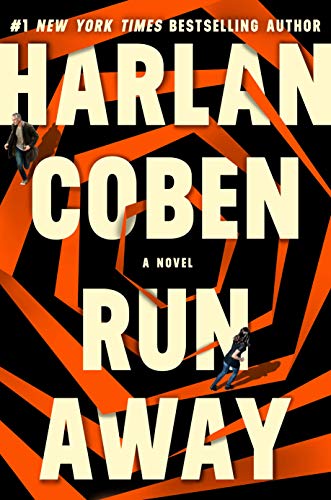 “Coben is a masterful story teller who switches smoothly between sets of characters, keeping the reader engaged and intrigued.”

In Run Away, the latest thriller by Harlen Coben, a Wall Street wealth manager, Simon, sees his estranged drug addicted daughter in Central Park. When she runs away, he is heartbroken.

As he says later in the book, he can’t help wondering what he did to cause the situation: “You go through every damn moment like that because even though his mother had warned him, ‘Kids don’t come with instruction manuals,’ and you quickly learn that your child comes to you hardwired, that in the battle of nature vs nurture, nature kicks complete and total ass—still, when things go wrong, when something this dark invades your child’s soul, you can only wonder where the hell you went wrong.”

Simon desperately searches for his daughter, Paige, even after his wife is critically injured.

The story of Simon’s search alternates with another search for a missing young man from Chicago. Elena Ramirez, a short, competent ex-FBI agent is hired by the wealthy father of a boy who also had some drug problems. When she arrives at his office, she can see the man is put off by her appearance.

“‘It’s just that you come highly recommended,’ Thorpe said in way of explanation.

“Meaning he expected something a little more polished for his money—not a pudgy Mexican barely five feet tall in mom jeans and practical shoes. These guys heard her name and expected Penélope Cruz or a lithe flamenco dancer, not someone who resembled the summer help at their beach house.

‘And the most expensive, so let’s get to it, shall we? I understand your son is missing.’”

The third alternating strand follows two young killers. Ash and Dee Dee are executing a series of seemingly unconnected victims for an unknown client. Each hit is different to guarantee they won’t be connected.

Dee Dee belongs to a cult located in New Hampshire. When Ash suggests she is being brainwashed, Dee Dee makes fun of the traditional religious faith of a former foster mother they shared. She tells Ash that according to Christianity, “Evil exists because an airhead bimbo, who started life as a man’s rib, got tricked into eating a piece of bad fruit by talking to a reptile.” She defends the “Shining Truth” cult despite the fact that Ash can’t belong because they don’t recruit men.

Eventually, the three separate stories become entwined. When several unconnected victims of violence, accident, and suicide all turn out to be adopted, Simon and Elena begin to distinguish a pattern, although they can’t see the connections between the victims or the missing young people. Simon even questions the paternity of his daughter along the way. Drugs, the Internet, and the mysterious cult all surface in the desperate search for Simon’s daughter. Finally, the mysteries dissolve away with a series of discoveries and revelations, but the last knot is undone only in the final pages of the book.

Coben is a masterful story teller who switches smoothly between sets of characters, keeping the reader engaged and intrigued. Even the secondary characters are interesting and believable. Like an old-fashioned Agatha Christie, Coben’s book challenges the reader to figure out what’s going on. But the action also ratchets up the suspense with some scenes of violence. A number of Harlen Coben’s stories are showing up as TV mini-series these days, some based on books and some original screen plays. It’s easy to understand their popularity when he continues to publish new stories, like Run Away that are reliably good reads.